I have spent 5 hours of my life this week, on live chat, briefly to two people who couldn’t help me at all with my query about my contract ending and the price increase.
The 1st chat too over 1.5 hours to get through to the retention team and finally spoke to someone at 8.15 at night. He was very nice and helpful, but couldn’t help me with a package deal, but suggested I call in two days after my contract ended, as I might get a better deal. FFWD today 16.43pm I went on the chat and finally I had to give in and hang up at 8pm, over 3 hours.
I’m sorry to say, but this is rude and disrespectful to me as your client. If after an hour the retention team could not be reached, then take my bloody number and have the decency to call me back. I’ve been with you since 2013 and you’ve never been easy to contact, but now it’s diabolical!!!

Thank you for your post and welcome back to our community forums. We're here to help.

Changing prices is never an easy decision, but as service usage has increased over the last 24 months we have to continuously re-invest in our network. Doing so permits more people to enjoy our services and meet the demand to continuously deliver the fastest widely-available speeds in the UK. We're continuing to invest in our network which will help improve performance and reliability for all.

In addition to this, we have supported our customers with a range of upgrades and new services at no extra cost. Whether that's giving customers a free speed boost, upgrading their equipment or providing new content and channels, we’re committed to giving our customers more.

I'm very sorry to hear you had a bit of trouble getting a hold of the retentions team to discuss options; I'm afraid we do get busy from time-to-time, and unfortunately this results in a delayed response. If you're struggling to get through via live chat, I would advise giving the team a call instead if possible. You can reach them by calling 0345 454 1111 (or 150 from a Virgin Media landline).

Let us know how you get on either way.

I need to speak to a manager now!!!

I am on the verge of blowing a fuse! After 12 hours of waiting and trying to get through on the phone last 10 days, I finally got through to someone who talked sense last Friday. Despite that,  what was supposed to happen didn’t happen, I called up again on the 12th and was reassured it would be rectified & I have ring again today to be told that didn’t happen, so I have effectively been told a whopping lie!!!! And then after yet another phone call today, was told yet another story and then whilst we were talking, she bloody hung up on me!
🤬🤬🤬🤬

I am very sorry to hear that the line dropped, but I assure you that the team wouldn't have terminated the call intentionally.

Would you mind expanding on the situation, please? What has been discussed with the team and what are you stating has been agreed but not actioned?

Where to start! To point out firstly, 2 hours nearly per call, either waiting and waiting and speaking, probably over 10 hours of waiting.

Been with VM since 2013, contract up for renewal, price too high. 4/1/22 had a negotiating live chat no joy, said to speak to someone else, put through to Darwin (Retentions team), offered me a package for £120, I said too much, said to call back in 2 days when contract expired, as may get better deal.

6/1/22 Rang again to do so, spoke to Premsai, tried to transfer me to someone else, but was left waiting on chat from 16.43-8pm, I gave up in the end as family going hungry!

7/1/22 Rang again, a bot then on Whatsapp, 12.22-13.36 which was closed by bot. Rang again later around tea-time using my VM mobile 150, as thought you never know I might just get through this way & it is more successful it seems, to the detriment of anyone that doesn't have it. Spoke to Alan who couldn't match Darwin's deal, so I said I would give up with VM, as SKY has better deals, he then transferred me to Gareth in First Time Resolutions, who basically was brilliant and told me the info I was given by Alan was wrong. Anyways we struck at deal at £115 changing and agreeing the package together, this is where the fun (if you can call it that starts).

A great deal, I'm happy all to be sorted by an engineer on the Tues 11th Jan. Got text from Yodel 8th Jan, saying Virgin kit will arrive 11th Jan, only 1 box delivered on 10th, that being the new remotes & HUB. Assumed engineer would bring new 360 boxes with him on the 11th. Waited all day - no engineer, next day no engineer, contacted live chat again - forgot to take name, explained situation, he said I should have had 2 boxes delivered, as I was down for a quick install ourselves? He told me he would re-order the two 360 boxes again & they would arrive in 2 days & not to install the new HUB until I got them.

3 days later no box. However turned TV on Sat morning, we seem to have 360 on our TV, it's wiped out all our recordings (which we expected after install). So back we go on the phone again to try & keep a lid on it to explain. Got through to lady called Sherri, she tried to tell me that I wasn't down for 2 new 360 boxes that it was upgraded via software update to the V6 box & I assume the other one my daughter has. I tried and tried to tell her that my package says 2 NEW BOXES, she would not agree, even though I've the contract to prove it. I told her what her colleague had said & that he'd ordered them to be delivered again & she said there was no record of another order, so I said 'so he lied to me then', he never even put an order in., then she terminated the call (or as you say it suddenly terminated by itself).

So here I am nearly about to blow a fuse basically and why I want to speak to a Manager!

Although your new contract states 2 x 360 boxes you don't actually receive new set top boxes unless you have the older TIVO boxes. The difference in the naming of the boxes on the contract is basically to say the boxes have the new Horizon software and are therefore no longer classed as V6 boxes.

The V6 boxes are sent a software update to the new 360 software and interface. Having two V6 boxes updated to 360 means you keep the hard drive storage on both boxes.

If VM sent out new 360 boxes then one of them would be a master box with a hard drive, and the other is a mini box without  a hard drive, so you would have lost storage facilities.

There should have been instructions sent with the two new remotes, mine where printed on the inside of the box, advising you would lose all recordings, and how to set up the boxes for the 360 software and also detailing that the boxes would be automatically updated 5 days after the package was received  (screenshot below) 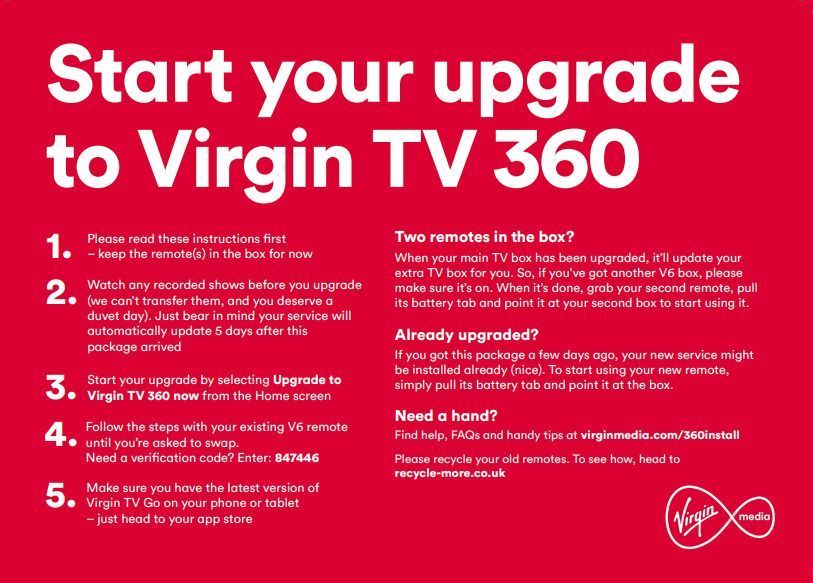 Thanks for explaining the situation you are facing Debbied30,

Firstly, we would like to apologise for the customer service you have received, when upgrading your package to our new 360 service. This is not the service we want any customer to receive.

Due to this, we will raise a complaint on your account due to the dissatisfaction of the service received.

With regards to your package, our valued member of the community @newapollo has given the correct information about the boxes.

Your current boxes will be updated with the new 360 software, this should have been explained at the time of your upgrade.

For more information about completing your upgrade check the link here.

I will pop you over a private message to raise a complaint on your account and discuss this further with you.

Please click on the purple envelope to accept the chat.
Kind regards Jodi.

Not sure if you work for VM or are a customer like myself. However you have explained it far better than anyone I have spoken to. I get all that you are saying, but very difficult when you are under a different impression entirely by several people.

P.S I take it I can now plug in my new Hub, as I was advised not to, until I received the phantom new order!?

No, I don't work for VM, I'm just a long standing customer like yourself, but glad I was able to help.

You won't be able to recieve the 1 Gig broadband until you plug in your new hub.

You will need either the  hub MAC address or hub serial number which should be prited on a sticker on the base of the hub, and your account number and area code.

I don't know if you want to do this but when I received a new hub I changed the Network name and password on the new hub to match the old one.That meant I didn't have to go around and redo all the connections and passwords on my other equipment.

Getting back to your 360 boxes (that's what they are termed now) you may not have received a short user guide. There's one online if you need it.

Any problems just create a new post and we'll do our best to help.

Thank you again for all your help. No probs with the HUB, am pretty techno when I need to be, so hopefully it will go smoothly. Thanks

VM are putting a complaint in on my behalf, not the first time I've got to say sadly.

Have a lovely evening and thanks again x