Price Not Being Honoured

So back in December had an email to say my price would be increasing to from £24 to £41 per month from 02.01.2001. So I called up to see what the best price they could offer me and I was told £41 per month is the best they could offer. So I decided to cancel and started to shop around for other deals, I was then contacted 48 hours later by a member of staff from the Retention Team.

They suggested I remove my home phone from the package as I wasn't using it and they offered me a deal for 12 months at £19 per month, which I was delighted with. I had a conformation email confirming the new price of £19. My January bill would be £8.74 with a credit of £10.26.

In January I was charged £41, so I called to query this and was informed the price would in fact change from February. A few days later I received the February bill for £42.78, so once again I contacted Virgin only to be told that there are no details of the £19 deal on my account, and that the monthly cost will remain at £41. I then once again went through and cancelled this. The Retention Team contacted me once again and despite me stating that I have the emails offering me broadband only for £19 they are not willing to help me further.

Welcome back to the Community Forums, I'm terribly sorry for our delayed response from here.

I'm sorry to hear there was an issue and a lot of trouble with your bills and the package which was offered to you, this is most disappointing to hear. If you are still seeking help with this, we'll do our best to get to the bottom of this for you from here. Would you be able to send us a screenshot of the package confirmation you received for £19 (of course, removing any personal information before you do this)?

Please find attached a screenshot, today I've been charged £42.78 instead of £19.

Please get back to me as soon as you can 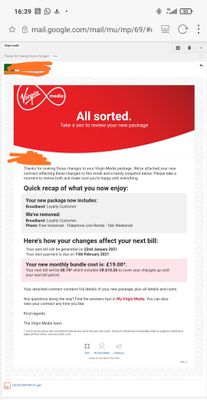 Thanks for your reply, wolfie101,

I'll send you a private message to discuss your account in detail.