Overcharged on a new contract.

I am being overcharged as to what was agreed on my new contract back in December 2019.

I have been with VirginMedia since it was NTL and like most always seek a better deal annually.

My 12 month contract was due to expire the same time as a house move. I inquired online to see if I could get VirginMedia at the new property which prompted a salesman to drop his card through the letterbox. When we moved in to the new property I invited him round to discuss a contract.

At the time the Black Friday deals were still active and he said he could terminate my old contract at my old address and setup a new contract at my new address. The agreed fee was £52.50 a month.

This, I believe, was the £45 "Bigger Bundle" deal plus 1 Additional TV Box.

Since the new contact has been in place I am being charged £80+ a month.

Every month I attempt to explain this to customer services via the phone or web chat with mixed results. This is due to the fact that although my contract is for 12 months, my contract online says the deal expires January 2020 instead of Jan 2021. Eventually they give in and apply credit promising it won't happen again.... only for it to happen again.

I really don't know what to do anymore, cancelling my direct debit will probably cause more harm than good.

I have a document in front of me from the salesman agreeing £52.50 for 12 months. I should not be expected to spend 1-2 hours every month getting the overcharges corrected.

Attached is a copy of my contract with personal details removed.

Highlighted in yellow are correct details. The contract was taken out on 5th December, the deal was "Bigger Bundle" which was the current promotion.

Any help or advice would be appreciated. 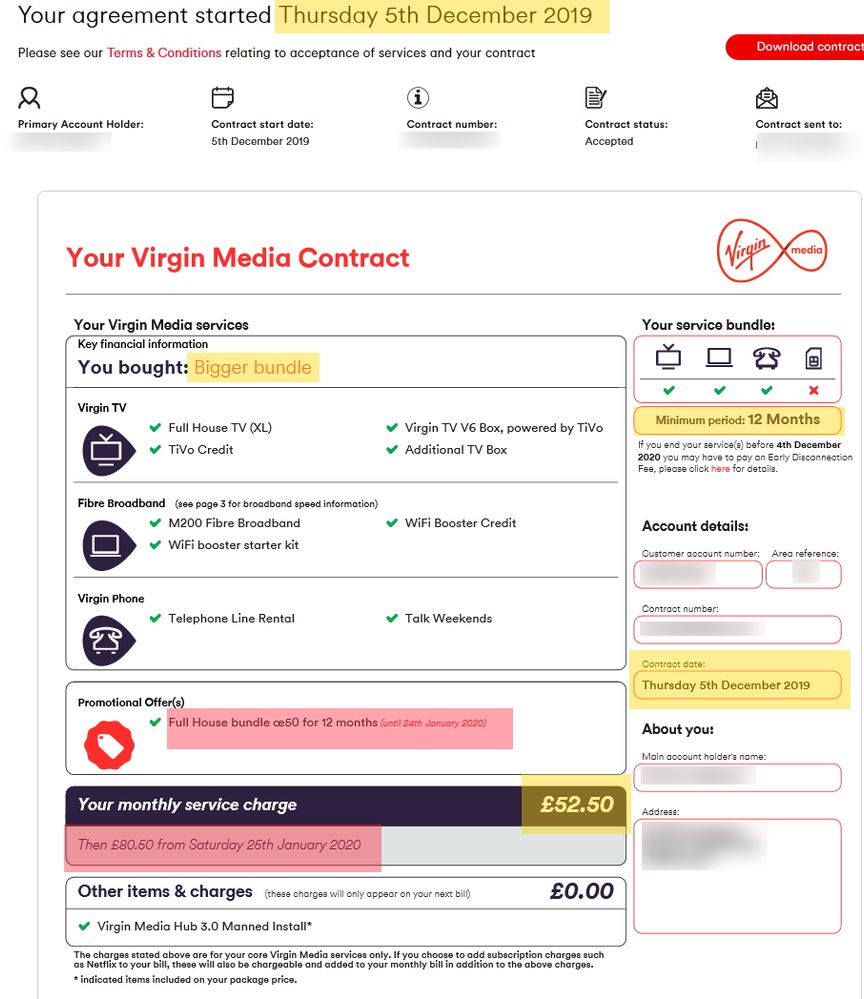 Thanks for posting. My apologies for the billing issues.

From checking the system, I can see you've managed to speak to the team today since posting and got this all sorted 🙂

Really disappointed to see my bill increase again this month.

My discount should be applied for 12 months, the contract started in December yet for the month of November I am being charged full price again.

Could somebody please review this, preferably the person who looked at it last time, as he understood what was going on.

Really sorry about this Felixkat,

We can pop you a personal message to get a better idea of what's happening here.