I had someone from the sales team knock on our door to convince us to move from sky to virgin.

Got my official bumpf from Virgin and noticed it said £33 a month with no mention of the credit or movies. Gave them a call, they said tough, it’s £33 a month or else and I couldn’t leave or else I would have to pay the rest of my contract in one go.

Not being able to deal with such appalling customer service and spoken to like dog muck, I’ve stuck with them for a year waiting to leave and for them to honour the deal. Still nothing. Called again today and told the only thing they could do was offer me £32 a month for the next 12 months!

I want to leave these lying thieving con artists and get my money back.

I’ve emailed a copy of my original pre-contract agreement to ‘a manager’ which clearly shows the monthly amount and credit to be applied I but don’t hold out much hope.

I am utterly disgusted with the service I have received thus far from virgin, and outraged that the salesman can give such inaccurate information with no repercussions. Their customer service is disgraceful.

What is my next step?OFCOM?

HI mushypea16, Do you have any written  conformation that this was agreed? Do you have the complaints reference number? ^Chris

Yes, as I said I have a signed pre-contract information sheet (where I keep one and the lying virgin barstool took the yellow copy)

No complaints reference as Virgin took so long and were so crap, I gave up complaining at the start of the contract.

And unfortunately I conveniently got the paper work confirming how much my contract would be after 14 days so I couldn’t cancel without penalty.

How on earth are they allowed to agree to one thing and not honour it?

I can’t seem to post pdf or photos of my agreement on here. Arrrggg

Hi mushypea16, thanks for the message. We will send you a private message ^Chris 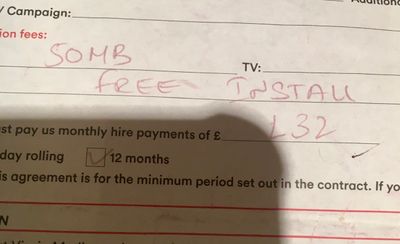 I am just in complete disbelief that they can get away such a breach of contract.

unfortunately I was very ill last year and did not have strength to continue complaining or fight this. Fortunately I’m a lot better now and am not going to let this slide, even if I have to take it the small claims.
From what I’ve read, Virgin seem to make quite a habit of deceiving and robbing people.
Will never touch these cowboys again.