Have I been missold? And what can I do about it?

Hope someone might be able to help or at least point me in the right direction - I think I might have just been missold a new Broadband contract.

I currently have a 100mb Broadband only contract which expired last year.  I finally got round to renegotiating it on 20 Jan.  I was happy with the product, but the price was getting steep having just received a letter telling me the price was due to rise from £43.50 to £47 on 1 March.

I had several calls over the course of the day as I got moved between different departments but 2 are relevant to the issue.

During the first call I was offered a new price of £35/month for 18 months, and the operator I spoke to (Connor?) emphasised it was a fixed price contract so there would be no increases at all for the 18 months.  I wanted to think about it so said I would get call back.

I called back later in the day and discussed my earlier call with a different operator (Mohammed).  He offered me exactly the same deal - £35/month for 18 months, and he emphasised the fixed price with no increases until the end of the 18 month period.

The pre-amble on the call says calls may be recorded, so I'm sure the contract discussion will be on record somewhere. That 2 operators stated the contract is a fixed price suggests it's not an individual mistake. I know I can leave without penalty if there is a price rise during the contract, but given that Virgin is the fastest available broadband in my area at the moment, I don't want to leave, I just expect the fixed price contract to be honoured.

Does anyone have any suggestions on how to head off the increase letter in 12 months time?

I am very sorry to hear of this as we don't have a fixed price contract option. This (March's increase) is the first price change in 18 months.

If we were to do an increase in 2022 and there's no guarantee we will, we'd send you documentation advising you of your options

Thanks for getting back to me.  I think there's some confusion within Virgin over this then.  Your sales reps are selling fixed price packages i.e. no annual price increases during your minimum term and it is also alluded to on your website, although you have to go hunting for it.  The screen shot below taken from the 'Legal bit' of the website clearly implies fixed price packages are being sold.  However, it also states that this doesn't apply for broadband only deals.  Unfortunately that was exactly what I was sold - a broadband only package with no price increases during the minimum term.  Only nothing is mentioned in the contract paperwork other than an increase at the end of the initial discounted term, hence my concern. 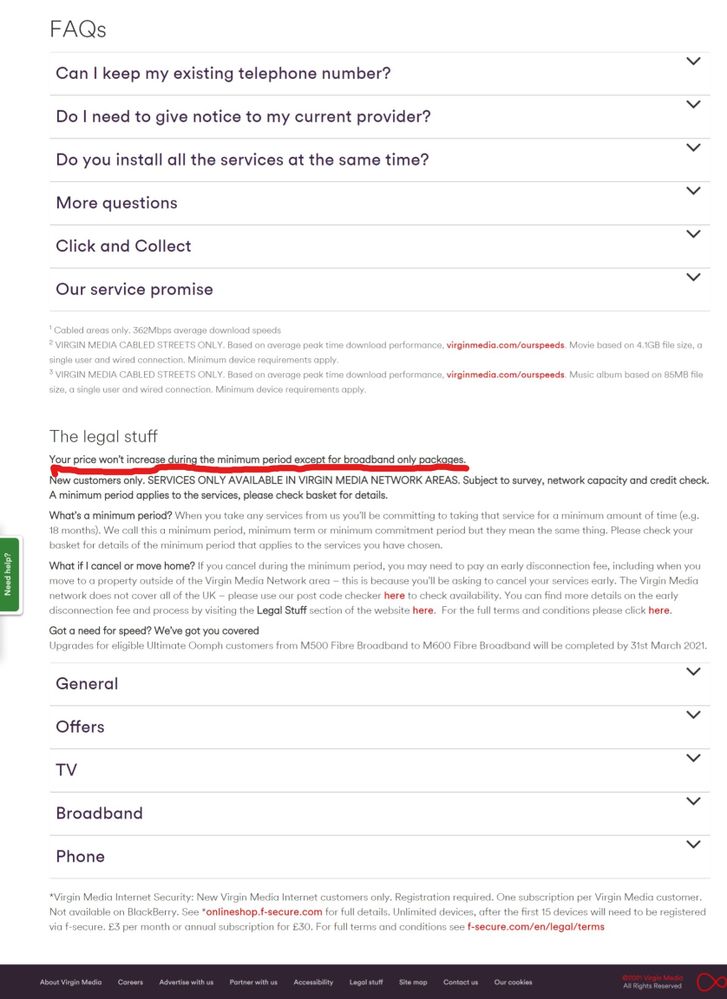 I get what you're saying however in our terms and conditions we do reserve the right to change the price via a price increase mentioned in my previous reply, however, we'd be in touch way in advance with this notice and also your options going forward

You're missing the point.  Yes you do reserve the right to change the prices as you go - just not when you state in the contract discussions that the terms of the contract specifically exclude that option.  That's not an opinion, that's just contract law!