We signed up to a new VIVID 100 Fibre package in April 2018 when we moved house, paying £37 per month - the price has continued to increased from April 2019 and now currently paying a hugely unreasonable amount of £59.50 for M100 Fibre broadband only. The package is meant to include Landline (Talk More Anytime) but since day 1 (over 20 months ago) our landline has not worked at all (no line whatsoever - can't make or receive calls) and despite complaints about this, nothing has happened, nor have we received any offer of resolution or/and refund etc. We feel we are already overpaying for the broadband service without the added insult of never having a working phoneline. Life has been FULL of turmoil (as it is often is for most people, I know) and we have not had the capacity (mental or physical) to sit on the phone/be on hold any more than we already have done so far trying to resolve this, and so time has passed by and we are essentially massively overpaying for a broadband only service for a very long time.We understand that we currently have a fast service but other fast packages are being offered out there (by Virgin Media & other suppliers from £30+ a month less!).  We called again recently to report all of the above only to be told that we could not be offered anything different along with a complete disinterest in the lack of phone issue. This makes me intensely angry and taken advantage of - it's a cliche I know, but it's pure daylight robbery. Do you know if there is anything we can do about this situation (outside of throwing toys out of pram and leaving Virgin)? It feels totally unfair to be treated like this, esp when we've been loyal customers for over 6 years + and have not received the service we signed up to!

Thanks in advance for any help or advice

100mbps and phone line is currently £50 without talk anytime so the price sounds about right.
As for your phone not working what did VM sat about it when the engineer visited to repair it?

We have never had an engineer to repair it - this has never been suggested as an option. We have reported the problem several times to VM call operators (usually when calling about other issues - when broadband is down etc) and the phone line issue has never been resolved. There has been a distinct lack of interest or desire to help with this.

Re the price of the package - M100 + weekend calls is currently being offered for £27 per month at the moment (to new customers) so I do think that £59.50 is very overpriced, esp when we don't have a working landline, let alone the Talk Anytime benefits.

have you ever reported the phone line when you have not had an area fault (internet down)
if not then the phone line may never have been picked up on.

You need to get an engineer out to repair it.

The £27 is not relevant to you as you are not a new customer. 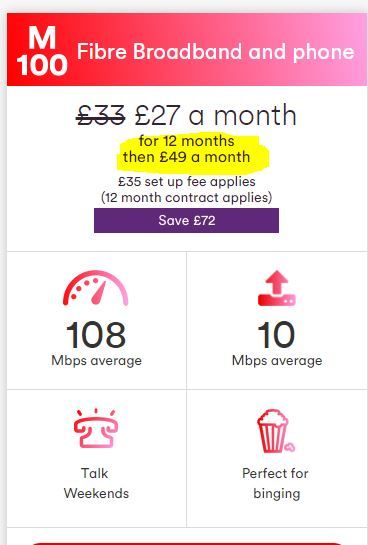 We just called up again to specifically report that the line has never worked and, the operator we spoke to - rather than wanting to resolve the issue and organise for the line to be fixed ASAP - only wants to go on about how we'd not reported it before (despite the fact that we have!) and therefore that they can't reimburse us anything. To say I am frustrated is an understatement - not only are they arguing with us that we have reported the issue (I am assuming that the past reports were never recorded in our notes as they were too busy recording only the issues of the broadband being down etc), and denying the fact that we have been paying for a premium service when we have clearly not received it (again I assume they can see from their records that we have never received or made any calls seeing as we have no working line!), they are also not prioritising the main issue: to get the fault fixed!... Every time I say that we want the fault resolved ASAP and that we then want the issue to be escalated to management as a complaint that this fault was never resolved despite reporting it and paying for a service we've not received, the operator keeps interrupting to tell us that we didn't report it and then asks us the dates when we did (as if we'd remember!!) and then says they won't be able to reimburse us because they don't have proof of us reporting it - despite the fact that we keep asking for the issue to be fixed as the priority, not reimbursement! It's like he is being purposefully reluctant to fix the issue and just wants to be argumentative about the whole thing which is highly unhelpful! We keep going round in circles - he is just not listening to us! - and my blood pressure is getting higher and higher. I am currently due to give  birth to twins any day now and I do not need this kind of treatment or stress. I am left to think that this is a VM customer service tactic - to frustrate their customers so much and wind them up, to the point that they end up giving up as it's not worth the hassle health-wise. He is making it impossible for us to a) get the fault fixed and b) to lodge a complaint/escalate this whole issue.

Re the prices - I understand new customers only ever seem to get the good deals, but even £49 a month is a lot better than £59.50,  esp considering we're not benefitting from the extra premium £8 per month Talk Anytime service.

So did they book an engineer?

Re: Grossly overpaying for broadband only (phone line has never worked) and not being offered an ...

Thank you for bringing this to our attention.