Being seriously inconvenienced for your error.

Rang virgin to cancel my account around the 1st of April. as was moving home and my new house was not going to be ready until October. I was informed of the exit fee which I was happy to pay as I recent,y agreed a new contract. All good so far. I am going to be living with a family member who is already a virgin customer.

Received a follow-up call and Spoke with Nathan D on 7th April  he said virgin could put account on hold. Not cancelled. And therefore avoid paying £230 exit fee. He told me to keep hold of the equipment I had.

Rang Virgin as received an e-mail saying i was still going to be charged the exit fee even though I though5 my account was going on hold. Spoke with Riley on 20th April (leaving team)

Riley went to transfer me and we got cut off. Annoying.

So I Rang back and spoke with Kenny (leaving team)

Kenny checked with someone who informed him that my account could not be put on hold and that the e-mail saying I was going to be charged the exit fee still. Not happy with the fact Virgin seemingly do not know what one department are doing compared to another and are giving customers false information.

E-mailed Nathan and he replied confirming my account could be held. (21st April)

23rd April: received a phone call from a member of virgins equipment collection team saying he was coming to Church Street West to collect my equipment. (I haven’t lived here for over a week at this point - again showing Virgin don’t know what s going on between different departments etc.)

Plus, on the 7th, I was told to keep hold of the equipment by Nathan. This equipment is in storage 1.5 hours away from where I live.

24th April: cardboard boxes arrive at new address ready to send back equipment. I recycled these for you. Again, the stuff is in storage.

30th April: e-mail received saying I will be charged for equipment. Not happy. I have done nothing wrong. What is going on?

The whole thing has been a fiasco from start to finish. You are putting me off actually coming back now.

2nd may: rang to complain. Spoke with Wayne.  He simply dismissed my complaints. Had no interest in what I was saying and basically told me it was tough luck. What a disgrace. He basically said you need to get the equipment and send it to us or you will be charged.

So now, I have to travel 3 hours round journey at my own expense, still pay the exit fee as you won’t discount this will you, even though this is your fault that the equipment is in storage and I am being inconvenienced now?

I did want to stay as a Virgin customer but I am not too sure now. I am really annoyed.

Is this genuinely what you call customer service? 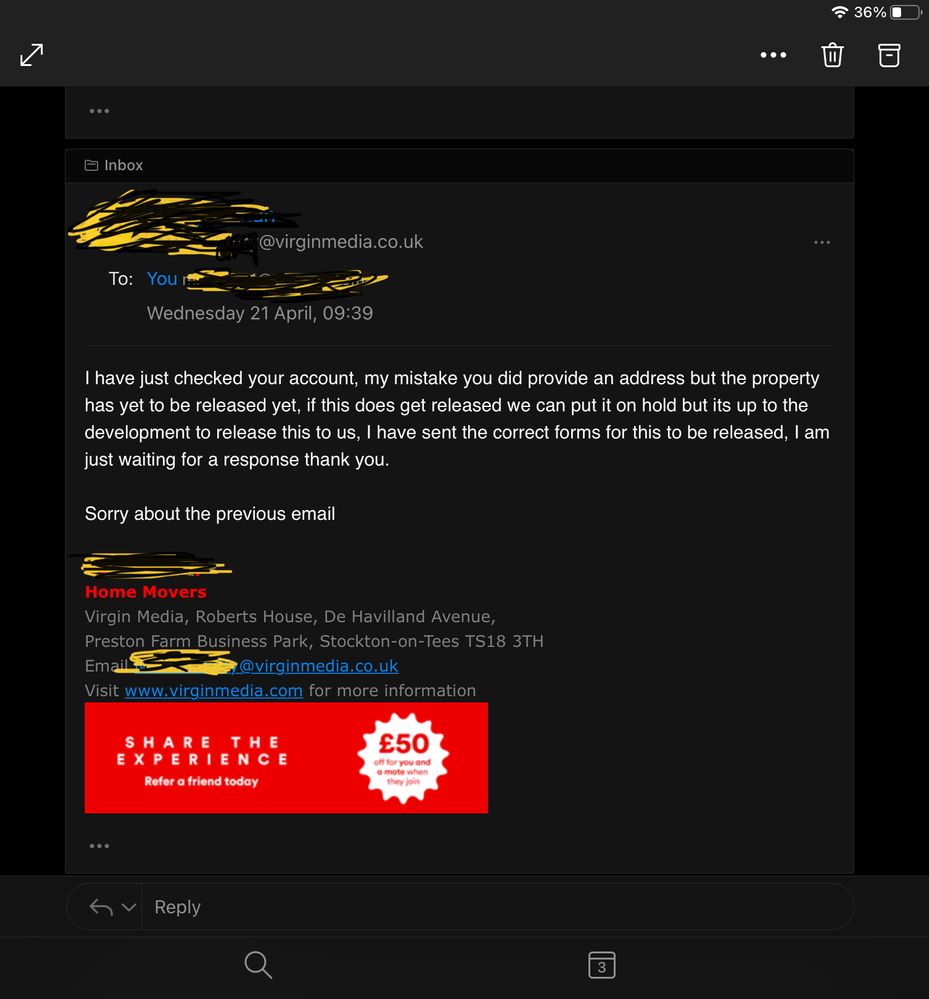 Re: Being seriously inconvenienced for your error.

Thank you so much for your post to our community forums and welcome to the team!

I'm so sorry to see all the confusion with your move and the account. I'm going to send you a PM so we can discuss this further. Please keep an eye out for the purple envelope in the top right corner of your screen alerting you to a new message received!