Being lied to by Virgin Media

On the 24th June 2021 I called to add football channels to my VM package and because I'm not great at taking notes on such calls, I chose to record the call so I could listen back in my own time to absorb any and all of the offers made - this is very helpful for me.

After much negotiation, the girl I spoke to offered £64 per month for 18 months for 100MB, Unlimited calls, Maxit TV and Sky Sports, which I felt sounded good.  I said I'd like to think about it and that I could call back. At the end of the call, I asked her to confirm once again, how long the £64 per month would last for... "18 months" came the reply.

I called yesterday (01/07/2021) and the guy I spoke to said that what I had been told was wrong, adding that it would only last for three months and then would rise to £79.  I have her on my recording saying it would last for 18 months and of course Virgin's own recording of the call would say the same.  I was so disappointed at being lied to / let down, I told him to cancel everything.

He didn't apologise - he simply said "sure", and that was that.

Virgin Media - you have disappointed me hugely.  I was a loyal customer of yours, right there for you to make money from, and you treated me like I didn't matter.  You are appalling.

The way I read your post is that you were offered a price on your first call which you didn't accept, and then called back to find the price had changed?

If so - unfortunately this can happen. I know "Martin Lewis" programmes are quite vocal about giving any excuse you like with a retentions agent and then coming back another time, but this tactic simply doesn't work with Virgin. The price you're offered is often valid for that call and that call only. If you hang up the call, you need to consider that price as off-the-table. Unless you accepted it, there's no contract and VM are free to restart the haggling next time from scratch.

Realistically - do your research before calling into retentions. Use VM's bundle builder website to get an idea of standard pricing (ignore new customer - you're not one) for the combination of services you want, and also price up at least one alternative provider for the nearest comparable. You can expect a small discount on those prices in exchange for the 18month contract, so have a figure in mind for what you're willing to pay and what you'd like to pay, and stick to those.

If VM will match those prices, then accept the offer and re-contract on-the-spot. If they won't, then give your 30days notice and start the process of installing your chosen new provider. VM's outbound retentions may call you with another offer - if they do, and you like the price, accept it immediately. Otherwise, you need to be prepared to go through with the disconnection and, please make sure your new services are instlaled & working before VM is disconnected, else you'll be off-service completely.

Thank you for your reply.

To elaborate, I specifically asked whether I could come back to her on that and her reply was, and I quote, "Yeah, what I'll do is defer the offer for you so if you want to give us a call back it will be on the system and you will just need to say to them...(that it is on the system)" - and I said "ok, I'll give it some thought and I'll come back".

If the price you are offered is for that call only, that's fine too... but they should make this clear during the call. They most certainly did not on my call.

I don't understand why they would choose to lose a customer who was right there!  They spend all that money on advertising trying to win new customers and I'm a customer right there for the taking and they'd rather lose me to whoever else... it's extremely annoying... sorry, but they're nonsensical idiots.

No wish to enter the debate.

Only to say that the current offer on your bundle is £80 per month for 18 months for a new customer and the full price £115: 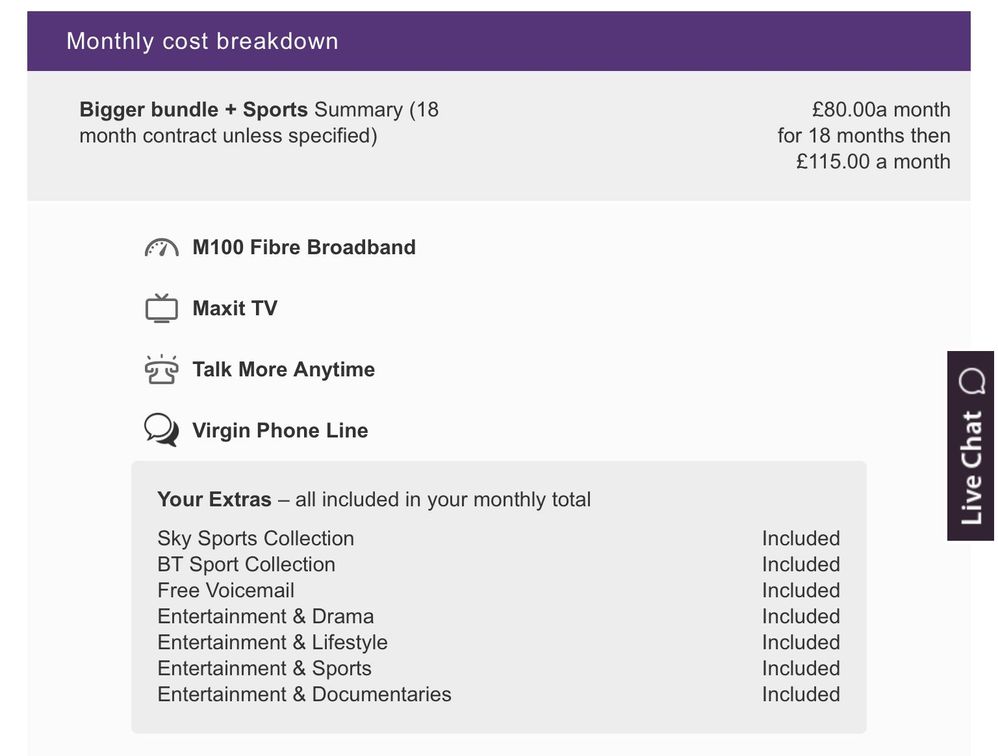 To elaborate, I specifically asked whether I could come back to her on that and her reply was, and I quote, "Yeah, what I'll do is defer the offer for you so if you want to give us a call back it will be on the system and you will just need to say to them...(that it is on the system)" - and I said "ok, I'll give it some thought and I'll come back".

I can only speak for my experience of calling VM over the years, and from (similar time) responding to posts on these boards, that this will have been the first time the "ask the cat and callback for the same price" theory has ever worked successfully.

I don't understand why they would choose to lose a customer who was right there!

There's probably an element of "call my bluff" about this. The agent doesn't think you're actually going to go through with the disconnection and maybe gambling that you'll callback later to change your mind.

Only you can decide your next course of action. And on that note, I'm probably "out" of the debate too - this isn't the first time this point has been discussed and it won't be the last.

Welcome to the forums and thanks for your post. I'm really sorry to hear of your experience when requesting to change package.

When you call through or chat with us regarding an account package, a lot of the offers made are known as 'on the day' offers.

We can defer them, but offers can also change.

I am more than happy to look into this complaint for you however, so I will just send you a private message.

Please look out for the purple envelope.