Well can I say things moved quickly since posting on here........... I wish I had done this sooner as the hours I, my wife and my son spent on the phone to overseas call centres - to be repeatedly told everything was working perfectly - is time we won’t get back. Which it patently obviously wasn’t - otherwise we wouldn’t be effing well phoning. Anyway....................

LOL this is very true. Seems to be a belief in first line support customers just phone up to waste their time, when there may well be an underlying fault.

Have had a visit from a VM engineer who was excellent - helpful, courteous and informative ( I think his name was Stevie - please put in a good word for him). In short, he checked the cables outside the house - minor fault found. Cable repull booked. Checked cable going into house - big fault found. He identified straight away the possible cause as being a faulty splitter under the floor, wasn't able to sort straight away, but said he would return after his final job the following day. True to his word he did just that.

Will monitor over the next week or so, but seems a huge improvement. For example - my music streamer has always shown signal levels of between 40 and 60% to date. As of last night sitting rock solid at 100%. Other devices show similar improvements.

Begs the question though - why did its take this aggravation to get this sorted? Why despite my repeatedly insisting that there was a fault - possibly outside - did nobody even think to at least check it out preferring instead to insist there was no fault. Worse - we were on a couple of occasions told that the fault would be fixed remotely “within half an hour” - the cynic in me thinks this was flannel to get us off the line to massage call centre stats. I won’t clog up the post with call centre stories, but we have a few.

First line support are bobbins. Id go with your cynical side...

As I said - we will monitor this over the coming week. Furthermore - could this be the original problem that I reported years ago and have put up with a sub standard service ever since? Am still somewhat aggrieved about the whole thing to be honest, as so much hassle for both sides could have been so easily avoided.

Without wanting to add fuel to the fire, yes it could

Ive no loyalty to VM other than I'm a paying customer same as yourself. I really dont want to get you all aerated, their systems are what they are. When  the broadband works , it works good, and thats the sole reason I still subscribe. When it dont , come here

If you want to repost your power levels and network logs, we can likely tell you if it will stay fixed. On the compo for it being pants for long enough, go down the misled by customer services route not the "not getting what I pay for" as that will get caught in the OFCOM definitions trap.

The sickening thing is that the response you have had on here that you are happy with is exactly what should have happened day one. Someone asks the right questions, passes it to someone that has the interest to add comments to your account and your support ticket (big up to @Jodi_S), nice engineer comes round, fixes problem.Not rocket science.

I would just like to add nice of you to come back and report the outcome (so far), drop us a line (if you'll pardon the pun) when the re-pull happens. More importantly how is your significant others laptop doing? I have been there, which explains why I spend some of my free time helping on here. No one should have to go through the trauma of their SO being disconnected constantly, I can only empathise with your pain....

OK folks. Quick update. Things seem much improved on all devices - except my wifes laptop for video calls...... WOnder if tat fault lies elsewhere. However everything else is vastly improved, not perfect but much, much better. Repull takes place on Friday so hopefully that may be the misinglink in this chain.

Readings posted as of tonight bel 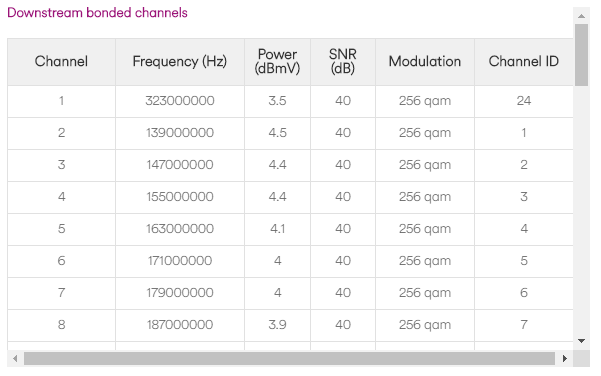 Yes it is Hub3

Have you separated out the SSID's? And switched intelligent WiFi off?

Hi.  We were due to have a technician out today to run cabling in the street.   No one has appeared.   My husband had taken a day off work to wait in as we were told by text that some one over the age of 18 had to be in between 1 and 6pm to authorise the run of the cable.   Looking at the garden it does look like someone has been and made a bit of a mess but certainly not while we were here?!  Having phoned retentions at VM someone in India said there’s was someone working on the cabling in the street right now?!   I don’t think so!  Has someone been out?   When?  What was done?  Is the job complete?   Why did my husband need to take a days leave for no one to appear?  For a communications company the communication is shocking.   Really, really awful.  Anyway, disconnection is still scheduled and unless this gets satisfactorily resolved we will have no choice but to continue with a switch.   I did ask the girl in India to confirm what had been done and to see what deal she could offer me if I was considering staying but she said I would need to phone back  only if it was no longer working?!   And her manager would only tell me the same, so I was told, so I gave up trying to continue any further at that point.   Too many hours have been spent on the phone to India being told everything is fine when trust me, it isn’t.  Really frustrating!  Please can someone confirm: 1 - what has been done, 2 - what still needs to be done, 3 - why some one has been digging up our grass without our permission and 4 - we need a call from retentions to discuss potential disconnection.

Thanks for posting, apologies that you have had a missed appointment with our technician.

I will pop you over a private message so I can take a look at your account. Click on the purple envelope to accept the chat.

Thought it time for a wee update, and I can tentatively confirm a result. Thanks to Jodi and her colleague Louis intervention (plus two very, very good engineers) we seem to have a solution. Will monitor over the next while, but so far so good. Pity it took all this aggravation to get here when it could have been so easily dealt with at the beginning (years not months ago). Really begs the question as to how many customers are potentially being lost by VM due to the downright shoddiness of the first line support overseas.

Anyway, credit where credit is due, VM have come up trumps eventually, and in future I will not be dialling 150 - will come straight on here. Hopefully won't be necessary though.........

Thank you so much for providing this feedback. We have passed this onto our team, for the agents to see.

We appreciate you taking the time out, as you could understand we don't see much of it, so when we do It's always lovely 🙂

Honestly I have to say Jodi, Louis and the 2 engineers (Stevie and John I think) were exemplary. Had it been dealt like this from the beginning then the whole experience would have been so, so different. OK A couple of hiccups in there too, but in the grand scheme of things they were just that - hiccups.

Thanks to those involved (possibly even behind the scenes) for their help and intervention. Fingers crossed that is now the end of the problems.