So lets break this down:

On January 30th Jan my contract at Virgin Media was due to expire, I called Virgin Media that I was moving out and that my Mum who still lived at the address wanted to start a new contract/package, and KEEP the existing number for that address (which btw, has been in use there over 25+ years).

I was informed at the time over the phone when setting up the new package for my Mum that the number would be ported over, no problems.

Fast forward a week into her new package, number still hadn't been ported over. Thus begins the nightmare of trying to contact Virgin Media and have the situation sorted.

First, i was told I hadn't requested the port, as there was nothing about it in the notes. Which is patently false. I was told I would have to pay a £25 fee in order for it to occur - for which the woman on the phone said instead of paying, ill raise a complaint and a manager will call you so they can waive the fee for you. Yeh, that didn't happen. I got an emailing explaining that the request could be processed, please contact us AGAIN so that the the request can begin again.

So I call, being transferred from one department to another - no one knowing how to make this happen. When being transferred, the call would often end, meaning i would have to redial and start from the beginning all over again whilst waiting to connect on average at least 30mins.

Called yesterday, after being transferred 3 times and every time the call disconnecting whilst waiting to transfer, I tried using the Customer service chat.

They informed me, the old number in now in active, and cannot be ported over.

Can ANYONE at VM tell me what how this can be acceptable? I've been told 3/4 different things by whoever I eventually get to speak to, and now i'm being told its too late.

I would like a very detailed explanation from VM as to what they are going to do to put this right.

HI exasperated_21, thanks for the message. I will send you a private message so that this can be looked into further for you - Chris

Just received this text - You have got to be kidding me - Is there anyone at VM who knows what they are doing? This is totally unacceptable. 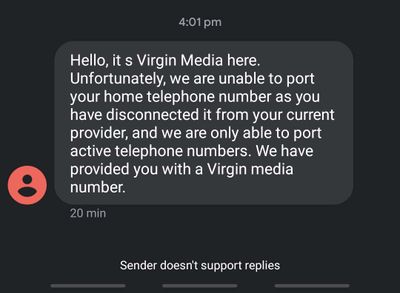