Unused landline socket detached from wall - can it be removed?

There are 2 Virgin Media sockets installed in my house, one for broadband that the router is plugged into, and an old-style landline one right next to it that we have never used. Both were installed before we moved into the house by previous owners. We don't use the landline anyway, but I understand that landline phones now plug directly into the router/Hub, rather than using this separate socket.

Recently the landline socket, that was held in place by two screws, has come loose and detached from the wall. It is connected to the broadband socket by 2 thin wires, one blue and one white (as shown in photo).

I want the socket to be either reattached to the wall or ideally removed. I called VM customer service and spoke to someone who said I can go ahead and cut the 2 wires and dispose of the landline socket and this will not affect the broadband, and I don't need a technician. However I'm not 100% confident they understood the issue and I'm reluctant to cut wires. 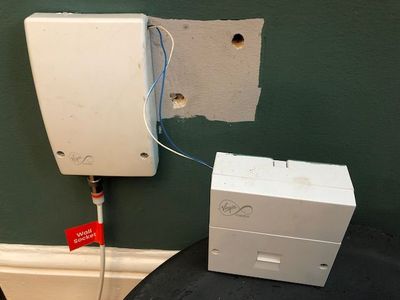 Re: Unused landline socket detached from wall - can it be removed?

Welcome to the community!

Sorry to hear that you're master socket has come off the wall. I wouldn't be happy for you to cut the wires yourself to be honest, though I can't see it causing issues with your broadband if you did. I would like to book you an engineer to come and either fix the master socket back on the wall or at your request and his advice, maybe remove the socket, if possible. Please join me on private message so I can locate your account and book you the earliest tech appointment. You can see your private messages at the top of the page, in the envelope icon.

Re: Unused landline socket detached from wall - can it be removed?

Thanks so much for your private message @MBE11

I have now booked you a visit for your master socket concerns– you can check the date and time via your online account here. If you have any issues with accessing your online account or unable to see your visit, please do let us know and we’ll pop you a message to confirm.

Please ensure there is someone over the age of 18 present at the time of the visit. If you need to change or cancel your appointment you can do this online or via the MyVM app by 4pm the day before the appointment.