Please can you help,

I am so dissatisfied with the service I have received from Virgin Media.

I was connected on the 29th January and was given a temporary landline number for 10 days until my original number is ported.

I called on Thursday 18th February was passed to a few people until I ended up talking to the manager who told me he would contact me within 24 hours. Well there was not a call back or email from the manager.

Today I called again 20th February and was on the phone for 2 hours and was passed to 5 different people who I had to explain the issue with each time. They ended the call saying my number is active but it isn't and now I am fuming.

Why can't someone solve my issue? Why have I been passed around the whole company? And where is my phone number?

Thanks for the post Amy87 and welcome to our community.

Can we please confirm if the line the number was active on is still active for the port to complete successfully?

Apparently it is active, I have been passed to so many people. They say its a technical fault and ended the call with it should be working now but it isn't.

I'm really sorry for the issues you've been having with your landline number port. Can you please log into your My Virgin Media account here to check to see whether the correct number is showing against your account or whether the temporary number is still shown? 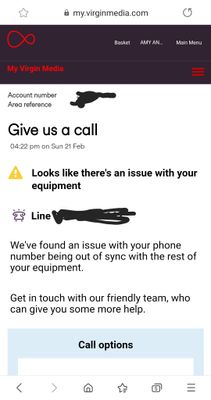 Thanks for the information, was the number active on the line it was being ported from?