Recently signed up to all services  including landline, was told could keep old landline number and should take no more than 10 days , this was as of 4th December, still has not been transferred.

Can anyone advise further, did try with 'triage bot' in help section which tells me below, thanks for any assistance. 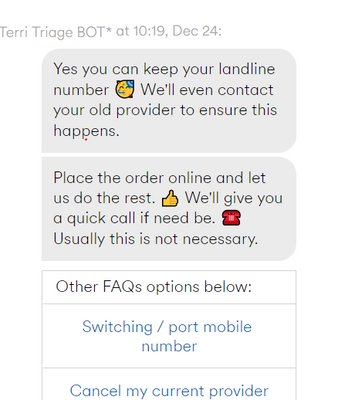 Welcome to the community page, thank you for posting.

I am sorry that this has not been done.

I will send you a private message so I can help you further, please look out for a plum envelope.

I've had a similar problem, and I am being told mine is terminal.

I've moved back to Virgin after a few years over on the dark side with Sky.

When I signed up I am 100% certain that I asked for my number to be kept, but Friday was my last day under contract with Sky, and the number didn't port.

I've been in touch with Virgin who say they have no record of me asking for my number to be ported talk to Sky, then Sky who say nothing we can do, number has been released back to Openreach, but try talking to Virgin Provisioning team.

Called back Virgin, and told there is no such thing as provisioning team, and I can't escalate call as supervisor is busy.

Not sure where to turn to next.  I can't prove that this is a Virgin mistake, as they never sent me a "here is what you told us response" when I placed my order, but feel so sick of this at the moment.  It just doesn't seem right that 1 business day after account closure the number is irretrievably lost, but I cant get hold of anyone in either company who is able to help it seems.

If anyone has any ideas where I can turn to next please let me know.  I guess I can complain to Ofcom, but not sure whether that is the best next step, or if it will even help?

Welcome! Thanks for posting.

I am sorry to see this.

If the number has been terminated then we would be unable to request the port over for your old number.