ldicenta
On our wavelength
1,595 Views
Message 1 of 26
Flag for a moderator

I have noticed other on this forum having with same issue but decided to create my own thread as I have been dealing with this issue for months now.

My upload speeds gets decimated at peak times, going from a steady 36mb all the way down to 1mb / 2mb or between 5-8mb and then shoots back up to 25+.

This happens so often that it makes streaming on twitch or youtube not viable.

I have called customer support who always tell me the same thing: to hit reset on my superhub and that it will be better after while promptly putting the phone down on me as I plead with them that this will not fix my issue.

An engineer also came over to my apartment but as the issue is intermittent and concerns upload, he told me that Virgin Media does not care about upload and does not guarantee anything to do with upload, so no one would be able to help me solve my issue.

Today I tried to stream again on Sunday 20th of September between 3PM and 5PM and encountered the dips in upload speeds again which rendered my stream unwatchable so I had to terminate it.

I have tried new ethernet cable, I have also bought a router and put my superhub in modem mode and I have also just connected my gaming PC to the superhub alone in order to see if that could help but no dice, always had the same results.

There was a fault in my area once and after Virgin had done fixing it it seemed like it worked fine for a few weeks at peak time but recently the issue came back and I am unable to stream on twitch as usual.

I live alone in a one bedroom apartment so no one else is on the connection so I have full control over it.

As you can see in the screenshot below, OBS dropped 16% (15575 frames) during a 26 minute test stream. and as you can also see in the speedtest screenshot my upload was consistently dipping down to 1-2mb and then back up to 25+ 30+ but fully unstable all the way through testing. 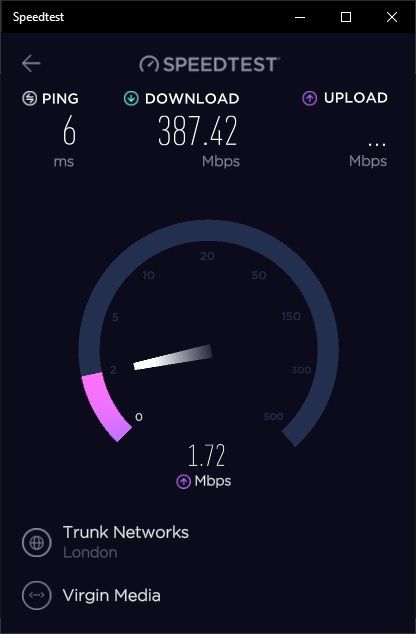 Has any one ran into this type of issue before? Is virgin really not taking upload into account? What are the possible fixes in order to have steady upload speeds?

I have also ran speedtests from multiple devices and also tried new ethernet cables + reinstalling windows fresh but problems sitll persists, as I am writing this I am running a twitch stream on a second test channel with the following results:

This is making growing a twitch stream incredibly difficult and I would appreciate any help as I am desperate to get this fixed.

ldicenta
On our wavelength
1,568 Views
Message 2 of 26
Flag for a moderator 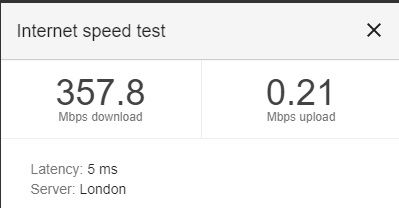 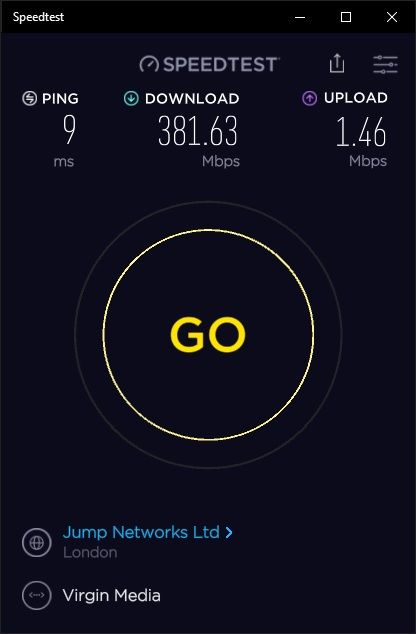 If the issue only occurs at peak times then it suggests a peak time utilisation issue.  Basically the segment of the VM network you are on doesn't have enough capacity at peak times to cope with demand.  In the past peak times were 4pm to 11pm weekdays and all weekend but with the lock down forcing people to work from home and many now still working from home the peak time is most of the day every day.

Utilisation issues are rarely a quick fix and in the past have taken VM weeks, months and even years to fix, although they were usually related to download speed issues.

AFAIK Virgin Media don't guarantee upload speeds, I don't think any UK ISP does.  For most people download speed is all that is important so most ISPs concentrate on that.

ldicenta
On our wavelength
1,555 Views
Message 4 of 26
Flag for a moderator

Thank you for your response -

Does this mean this is impossible to fix and we have to deal with bad upload forever from Virgin?

It does seem quite extreme that there is no solution

EDIT: It happens in the mornings too sometimes

I'm not saying it is impossible to fix, but if it is utilisation issue then it may not be a simple fix and make take some time to resolve.

If it is happening at off peak times (before 7am or after midnight) then it may not be a utilisation issue.  Let's start with some hub stats.

If you go to http://192.168.0.1/ (or http://192.168.100.1/ if you are in modem mode) to get the VM hub GUI. Don't login (unless you have a Hub 3 and this is your first visit to the hub GUI or a Hub 4, which does require you to login) but instead click on Router Status which is either a button in the top right of the screen or a text link at the bottom of the screen depending on which hub you have. Click on the Downstream, Upstream and Network Log sections and copy & paste the figures from those screens and post them here, don't worry about the formatting or you can post screenshots if that is easier. If using screenshots be careful to edit out or obscure any reference to your WAN IP or MAC address in the log to protect your privacy.  If you copy and paste the log then the forum will automatically censor this sensitive information. Also note that images will take time to appear on the forum due to a combination of awaiting moderator approval and buggy code.

The community can have a look for you and see if anything in the figures looks wrong and advise accordingly. Or you can wait for the VM staff to pick up this thread (can take a few days) and run checks on your line.

ldicenta
On our wavelength
1,538 Views
Message 6 of 26
Flag for a moderator

As requested (had to do multiple posts due to character limit)

ldicenta
On our wavelength
1,537 Views
Message 7 of 26
Flag for a moderator

ldicenta
On our wavelength
1,536 Views
Message 8 of 26
Flag for a moderator

@ldicenta Thanks for posting the hub stats.

Most of the hub stats look OK.  The only thing that I see that is unusual is the modulation on upstream channel 4 which is 16 qam when all the other channels are 64 qam.  Unsure if this is significant enough to impact your upload speeds, will need to wait for one of the forum team to visit this thread and see if their checks reveal anything.

Hopefully one of the team will respond in the next day or two.

ldicenta
On our wavelength
1,525 Views
Message 10 of 26
Flag for a moderator

Just for reference I also get that when i do "run a test" on the service status page but it says "Broadband: No known issues" on the main page 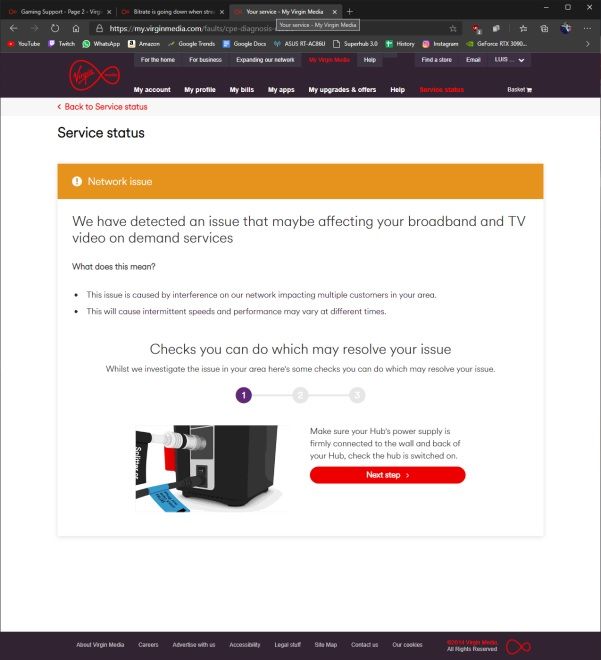