I have exactly the same issue, glad im not the only one. Im only on the 100 package myself and it really just came out of nowhere and it isnt just league for me its everything is 20 ping or so higher.

Same happening to me on 200mb,

Since earlier in the week my pings on WoW, Overwatch and League EUW are all significantly higher. 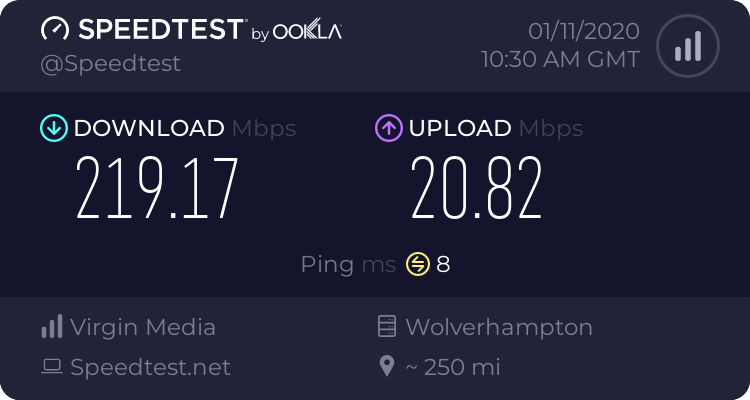 Nor is it my hardware as everything was fine until like a few days ago.

Before any staff ask the general questions.. Yes I'm wired, Yes I have a Cat 7 cable and Yes I have a gigabit capable ethernet thats running at gigabit.

Looking at my pingplotter trace, the latency starts before it hits Riot Games' network.

Thank you for your post. I'm sorry to hear you're having issues with your broadband.

Looking from our side I am unable to see any area issues that can be affecting this.

Can I confirm are you using a Wired or Wireless connection? Are you using just our hub or ours + a 3rd party hub?

It's an issue with your peering.

Look at my pingplotter screenshot.

I've tried a traceroute to Fortnite's London UK Server and the latency is fine.

Problems with intermittently high latency to European gaming servers seem to have been going on for a while now.  VM/LG know this, either they don't have the capability to fix it, or more likely they aren't prepared to invest the time and money so long as customers continue to pay rather than leave.  And either way, they refuse to enter into any dialogue or communication with customers to be transparent about the issue, and when or if it will be properly and permanently resolved.

I suppose this is no different to the company's attitude to its own awful customer service.

Thank you for your post. My apologies for the issues you're having with your broadband.

Thank you for the information provided concerning your fault.

I will private message you so we can look into this further.

You've been given proof that my service is fine and that your routing/peering is the issue.

We would like to look into this further if you can respond to my private message.