I've posted here once before and since then I've had 2 engineer visits. Got another one planned for today but just wanted to see others opinions.

I have had a BQM running for the longest time

I have also used a program called pingplotter to trace pings to google, here is a segment of time from last night where I experienced ghost bullets. 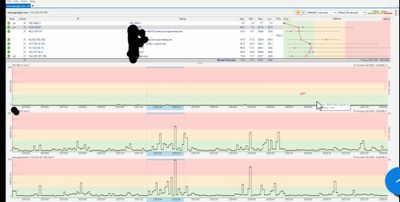 I've been told around 4 times now that there is no over utilisation issue in my area, the hub has been replaced, cable going into wall has been replaced twice too. I keep getting told its my network but as the pingplotter graph shows that my ping to 192.168.0.1 is always low and the lag starts at the 2nd hop?

Would be interesting to see your guys opinions?

Andrew-G
Alessandro Volta
1,030 Views
Message 2 of 12
Flag for a moderator

BQM does look to me like over-utilisation but I suspect at what (for VM) is too low a threshold for them to recognise officially.  There are occaisionally faults that create a similar looking BQM and are not over-utilisation, but they are fairly rare.  For it to be classified officially as over-utilisation, the problem needs referring to the networks team, they then monitor the situation for a few weeks/couple of months, and decide whether there are any capacity problems, and whether they go over whatever threshold is in use internally.  The measures used and the threshold values are not disclosed.

What this means is that there's always a lag of months between over-utilisation developing and being recognised, and then there's usually many months before it will be fixed (in some cases it seems they conclude it isn't economic to fix at all).

If the problem is not officially recognised, then staff will see no fault reference, and can only tell you that they see no over-utilisation report, and because over-utilisation doesn't usually affect power levels or SNR they'll probably telling you that all hub status data looks good, because it does.

Appreciate that's downbeat, but if the latest tech visit doesn't find a fix and the BQM remains the same, then your only options are to tolerate the service or leave.  If you're in a fixed term contract and wish to leave, then sometimes VM admit there's a problem without difficulty and let customers go without penalty.  In other cases it's necessary to use formal procedures to force their hand.  If it comes to needing to force their hand we can talk you through that.

Hi lbevin95 thanks for posting and welcome back to our community.

I am sorry to hear of your packet loss during gaming.  I have located your account and I cannot find any issues that may be causing your experience.  Can you please advise if this is mainly/only impacting you when gaming?

Yes it is, mainly during peak time.

Engineer visit went well, had a hub 4 installed and was advised to use my netgear xr500 router with the hub 4 in modem mode...

Engineer said by the look of the BQM it was over utilisation but because it wasn't more than 2% he couldn't raise it as an issue..

Thanks for coming back to us on this one.

Taking a look at the congestion in your area, I can see a tiny spike but it's only 0.35% of the time which wouldn't be considered when raising I'm afraid as this is expected during peak times.

Your downstream power levels are within range however they are on the higher end of the scale but not high enough to book another engineer. It may be worth keeping an eye on these via your router logs and if they go any higher, let us know.

When you are not gaming, are you seeing the same issues or are these only when gaming?

I am seeing the issue whether gaming or not, if not gaming I get slow load times on Web pages when the latency occurs, I bought my package for gaming as I play somewhat competitively and it just isn't good enough unfortunately...

The BQM graphs are something out of a horror movie, I've raised another complaint to see if I can be released from the contract without paying any early termination fee due to the ongoing issues and the fact that every avenue has been exhausted.

Thanks for your response @lbeviin95.

I'm sorry to see the issue remains, the BQM doesn't look too healthy.

How have things been since posting?

Thanks for the response..

Internet has been OK today bit unresponsive in places but not bad... It is usually OK during the day up until around 4pm onwards where it starts struggling.

I have ran extensive traceroutes using a program called pingplotter and a lot of the latency occurs at hop 2 (the hop just after the router).

Here is a live graph of the BQM

Apologies for the inconsistencies @lbevin95, I appreciate this is frustrating.

When the service is being unresponsive, are both wired and wireless connections affected?

Did you manage to raise a complaint regarding this?

Yes both wired and wireless are affected, I've raised now 4 complaints. The latest one was raised on the 2nd august...

After 3 engineer visits I dont think the problem can be rectified hence why I want to switch providers now.