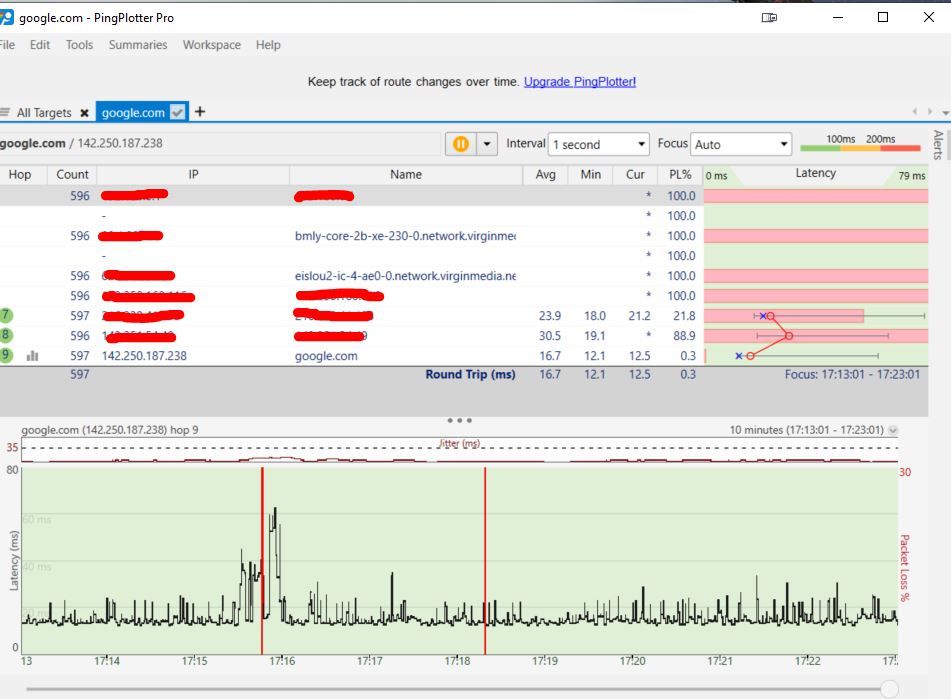 The PL is detected on basically every single IP I'm connected to. This prevents me from playing any online games (constant lag) or have conference calls when working from home (keep being thrown out / I freeze completely).

This goes for my desktop, where I'm connected to my Hub 3 via Ethernet cable, as well as my laptop, that is connected via WiFi - experiencing the same issues.

My speeds are good - no latency - I get Up speeds in the 80s, and Down speed in the 10s - expected and normal.

I have tried the following to troubleshoot:

Hope someone can help - thanks!

You're not getting packet loss, at least to the degree you claim. Certainly based on your evidence provided.

You look to be using the free version of ping plotter, as a 10 minute test using 1 ping per second. Judging by your packet loss value of 0.3% and your graphs you lost 2 packets during this time. Okay not fantastic but that could have been literally anything.

An intermediate node not responding to ICMP or throttling ICMP is fine. It is not a fault. The only thing that matters is if it got to the destination. Considering several nodes with "100% loss" actually resolved the IP address like node bmly-core-2b-xe-230-0.network.virginmedia.net, this would suggest they are configured to respond to ICMP and don't like you hammering them, or something your end is blocking all the ICMP return traffic. More likely something your end. I can ping those nodes fine, and if Virgin Media didn't want anyone pinging them they would block all ICMP.

Put this another way. You will not find any provider who would take you seriously if you called up and said "I've monitored for 10 minutes and lost 2 packets".

You're going to need to set up a BQM using ThinkBroadband, as well as share your hub stats.

He/She is using the Pro version of pingplotter.

Yeup you're completely right and I missed that!

Hi @Klaskan thanks for posting and welcome to our community.

I am sorry you're still experiencing internet issues which are impacting your ability to game or do your job.  I can confirm having found your account from here, that there is still an issue in your area. The estimated fix date/time for this has been extended to 7th May 2021 at midday.  I am really sorry and I do need to reiterate this is estimated only.