Lower Edmonton reporting in, apologies in advance for any hand-holding I might need as I wasn't involved in setting up our home network and as such am not so savvy.

Problem
Every 15-30 seconds in game or in voice calls I will experience rubber banding and freeze for up to 2 seconds as if I'd disconnected. I've observed this in Discord, Rocket League, Arma 3 and League of Legends which suggests to me it's not a problem with a particular game. This has been going for almost two weeks now. I've a friend with Virgin living a few roads down from me and when we play together we experience the connectivity issues at the exact same time as each other, if you stood somewhere between our houses you'd hear groaning in stereo I reckon.

Setup
We've got one of Netgear's Orbi routers set up downstairs, my computer and I are upstairs plugged into a satellite via ethernet, the satellite is plugged into the wall and that feeds downstairs to the router.

Things I've tried:
- Waiting a week
- Rebooting devices and router
- Switching to WiFi (just caused lag on top of the other issues)
- Trying different cables
- A scan with Malwarebytes and Windows Defender (no threats)
- Pinging the servers through CMD Prompt (reports 1% loss of packets but nothing else of note)

I've not been able to pinpoint a possible cause or make any progress towards alleviating/solving the issue.

I've attached a speedtest below and a BQM graph of the last 24 hours. Nothing looks out of the ordinary to me with the speedtest. 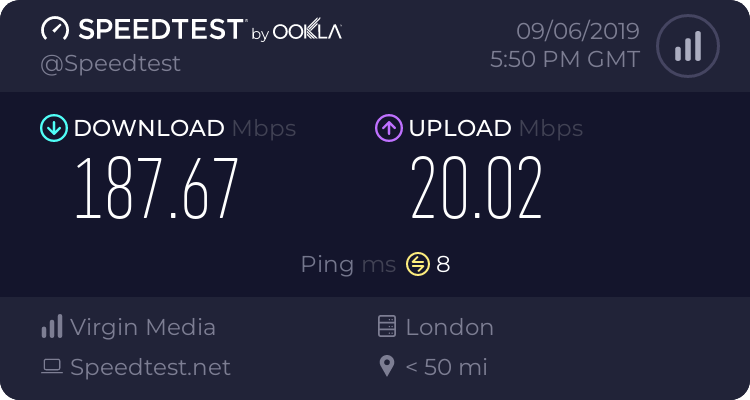 I've been following other posts as they've been made here, but thought I'd post anyway as my graph was different to what I'd seen in other threads... It looks relatively normal barring the latency spikes and packet loss, and the changes don't really coincide with any changes in activity around the house (I woke at 4am and have used the computer since. I haven't carried out any major/large uploads or downloads. Nothing changed while everyone in the house was asleep between 12am and 4am.) That period between 7 and 10 in the morning was pristine, I ran a few test games and everything was working perfectly with no connection issues at all. No idea what brought on that little internet ceasefire or what kicked it off again after 10.

I'm unaware if it's related but wow classic is literally unplayable, lag spikes every 30 seconds, located in North London as well.

i am experiencing the exact same thing and i live in edmonton. i keep getting sever lag spikes when i play online on my playstation 4 but the connection for all my other devices work fine. i have also checked my internet speeds and they are running good. this has been happening for about 2 weeks. if anyone has a solution for this please let me know.

I don't know if you've been following the other thread here by vori, but they've managed to get in touch and for what it's worth the response seemed to be that Virgin hopes to get the issue locked down and solved today (by 4pm at the earliest or something).  So let's see how it is over the next 24 hours and if there's still issues maybe open up a thread too.

Updating with today's graph. Pretty much constant all day, the graph looks less severe but there hasn't been a noticeable difference. The short spot of pristine connection yesterday between 7-10 didn't reoccur today. That one solid red bar is from a reboot just after 4, which I saw was an eta for fixes in another thread.

I'm on the same page as you Ronork, what a helpful assistance, and now we face a whole Sunday with crappy network.

I've woken this morning to a promising looking graph! I'll still update tonight to see if this holds out. Fingers crossed!
0 Kudos
Reply