It's been since May we've been having internet issues, it's gotten to that point of being beyond a joke, I've been getting estimated dates of when this fix for upload speed will be fixed, start from July, then August and now November, I'll be dead by the time this will get fixed. I'm even using an ethernet connection to stream yet barely make it to even 1mbps. I'm subscribed to a 100mbps package which comes with 10mbps upload, yet we're barely reaching the halfway point. I'll share some screenshots now from both OBS (the program I stream) and speedtests. 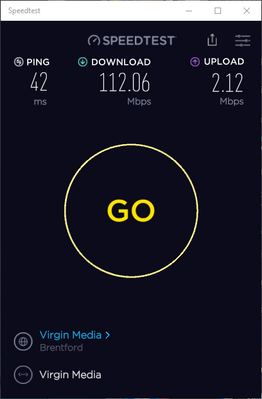 I'm not sure what even is going on, the upload speed goes back to normal around near midnight but goes all the way down near afternoon hours. I've never had this issue when we subscribed to your package which was long ago but now all of a sudden it's gotten so poor and it's been months now with the poor upload speed. Download speed is fine but upload is the issue. I cannot even game either as I lag too hard.

Same here.
500mb package and it bloody unusable.
Packet loss every damn night and cant stream at all for over a month now.

Who gave the estimated fix to be in November?

I am having the exact same issue

One of them from the team named Lisa

Bump but its pretty clear at this point that VM dont care.