BQM - is this normal - Google Stadia

Getting massive ping spikes whilst playing google stadia, I am only on M100, but on speed checks, usually I get above 70mb which is enough to play HD.

The ping spikes however, make it impossible.

is this BQM normal?

I can imagine all those new PS5 owners are crippling the network with massive game downloads as well...

Yeah from those BQM that is an over utilization problem, if you hand around one of the VM staff members will be along to confirm that and get it reported.

The BQM shows a typical over-utilisation pattern - you see how it's very poor during normal waking hours, and then peachy from about half past midnight to waking up time? Shows that the network and your hub are working perfectly when there isn't too much traffic. You can choose to believe whether this is Covid related, or whether VM simply sell contracts until (and indeed after) the local network is at capacity, but the outcome is the same for now.  Whilst console and game launches are adding quite a lot to VM traffic at present, I'd hazard a guess they are probably not adding much to mid week daytime traffic, so I doubt they're a major contributor.

Nothing you can do to improve matters. In some areas VM do indeed undertake work to rejig the local networks to balance loads and eliminate over-utilisation. But sometimes that's either not possible, or judged uneconomic if there's a need to spend money on more equipment. And sadly VM won't ever admit the truth, so there will be a fault reference and a "fix date", but there's no way of knowing if that fix date is actually backed by an actual plan of action and programme of works. Quite often it seem not, and as the fix date approaches it is simply moved a month or two ahead.

There is a little glimmer of hope, that as and when your area is upgraded to DOCSIS 3.1, and sufficient customers are using the Hub 4, then that ought to improve matters, but this could be many months, even a year or two hence. Simply having a Hub 4 on its own won't improve matters, and although VM aren't saying so, I suspect that even after D3.1 is active, a significant proportion of customers on an over-utilised segment would have to be using the Hub 4 before the benefits start to appear.

1) Sit it out, and hope that either the problem is transient and will disappear with some return to normality on the Covid front, or that VM do carry out improvement works, or that they get D3.1 live and it actually does work.   Sometimes the VM upgrade works do completely resolve congestion issues, sometimes they don't, all depends on the extent of the problem and the actions taken.

2) Get yourself a new ISP. If you're in a fixed term contract you'll probably have to use the VM complaints process (and arbitration at CISAS if need be) to try and be released from contract without penalty.  Even then, check with any new ISP that you're not in an Openreach area with contention problems, otherwise you'll be jumping out of the frying pan into the fire (and have a new fixed term contract to sit out).

Thank you for your detailed response - much appreciated.

Apart from doing nothing, I assume upgrading to M200 or beyond will also have no impact?

Will someone on VM on this forum contact me to discuss whether they can upgrade local capacity or as you say, unlikely to ever happen...

Upgrading your speed won't help at all - higher speed increases the bandwidth but does nothing for latency.  What's going on is that the local network has a fixed capacity.  At some point, usually the "Cable Modem Termination System" that sits at the head end of the local coax cable network, there's a bottleneck where maximum capacity is lower than the current traffic volumes.  Sometimes the bottleneck is only downstream, sometimes it is only upstream, sometimes both.  The various systems and hardware queue the incoming data packets when capacity is exceeded, and that is why latency goes up.  Most of the time they are still successfully transmitted, so measured speed can often be fine, but if the latency delays exceed hardware or software timeouts then they'll be discarded and appear as packet loss.  Increasing your bandwidth won't make any difference to the capacity or priority at the bottleneck, and you might get a faster speed, but you'd still be hobbled by the poor latency (and you'd have a higher bill and a new 18 month contract).

If VM have formally recognised over-utilisation, the forum staff will be able confirm that there's a fault and tell you the fix date.  But I don't believe they know whether that's a real planned fix date which has a plan of action attached, or whether it's just a fob off date (with a new fob off date attached as the previous one becomes imminent.  This thread is worth reading through as a case study. 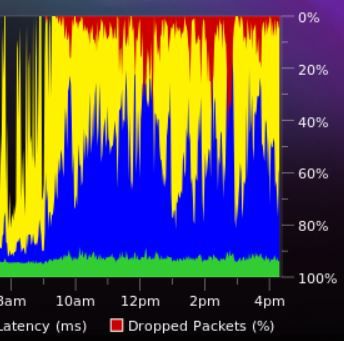 I've had issues with latency since July, keep getting told a fix date which passes and then you get a new fix date for the following month and so on but nothing has changed.

My issue isn't down just to congestion ( although that is a factor) as I still have latency spikes in what are supposed to be quiet periods and good ( most of the time) download speeds. For some reason this goes over the heads of Virgin support who either claim its just congestion and nothing else to it must be a problem with my pc, even had one suggest I try a new ethernet cable when I was getting 936Mb/s (according to SamKnows) to the router from my PC .

I've taken out a VDSL line for £20 (including landline) which has been great, not one single issue since the end of July. I use my virgin connection just for downloads (gig1) as I have fewer issues with download speeds (usually very quick, has dropped to around 500Mb/s a few times but still ok) and the VDSL for anything which requires low latency. I get 70Mb/s up and 20Mb/s down (the upload speed on VDSL most of the time is faster than my Gig1 connection)

So my recommendation would be to do the same.

@aj26 Top post!  Have you considered raising a complaint with VM, asking for them to pay the costs of your Openreach connection as a £20 credit on your bill each month until they get round to fixing your cable connection's performance?  I'm certain they'll say no, but you would then be able to escalate to CISAS and request the same.

I'm assuming they will just state that they only guarantee download speeds and not upload or latency. Just like all ISPs they are careful about what they "Guarantee" or state what they do or don't do in their sign-up policies.

I remember speaking to one of the reps many years ago when my download speeds dropped to be told we don't throttle bandwidth, it's against our policy to do so and there is no way that virgin could do it even if they wanted to, I'm assuming as they were 1st line and not very technical (so not intentionally lying). I had to explain to them that what they had stated was incorrect as all it takes is a config change on the CMTS (profile config) which would throttle bandwidth and that I wasn't implying it had been done deliberately but by a config error. I currently have one of my upload channels showing 8QAM (should be 64) hmm could it just be a coincidence??