zAoWz
Joining in
1,349 Views
Message 1 of 6
Flag for a moderator

I'm not a big online gamer, but have recently got hooked on Apex Legends.  I play on PS4 Pro and have been playing since April.  I tend to play on a daily basis unless away or super busy.

Shortly after I started playing Apex, I become aware of an option to view a list of servers from the start screen and, ever since, I have used this feature to ensure that the server I'm connecting to has the lowest ping.

As well as ping, this server list also shows packet loss.  For the first few months, pretty much all servers (or at least the European ones) had zero packet loss.  However, for the last couple of months (since early July is my best guess), I'm commonly getting packet loss results between 2% and 8% on a number of servers and I'm getting noticeable issues in game (hits not registering and rubber banding).

I have a Super Hub 3 and my PS4 is usually connected by an Ethernet cable.  I did some testing today and found out the following:

I've tried rebooting the Super Hub on numerous occasions, but to no avail.  My area reference is 26 and my postcode is GU22 9ED (Woking, Surrey).  There are no reported problems in my area when I check the Service Status page on the Virgin Media site.  I also ran the Test Your Equipment option on the Service Status page and this returned no issues.

One other thing possibly worth mentioning is that I also fairly recently upgraded to a Super Hub 3 from a Super Hub 1.  I think the packet loss issues started shortly after the switch to the Super Hub 3, but I'm not 100% sure on the timings.  Internet is generally fine for streaming and web browsing and rarely goes down completely.  It's really only gaming where I'm noticing a problem.

I had hoped that the problem would go away of its own accord, but, alas, it has persisted and is becoming quite frustrating.  It also seems pretty poor that I can get a more reliable connection to the Apex servers through the 4G on my mobile phone than through my Virgin fibre broadband.

Any help would be much appreciated.  If there's any additional info I can provide, just let me know.

Welcome to our Community Forum and sorry to hear that you're experiencing packet loss whilst playing Apex Legends.

Are you able to try a different game online to see if you're experiencing the same issues as Apex Legends?

Whilst you're playing, are there any other devices being used at the same time?

zAoWz
Joining in
1,223 Views
Message 3 of 6
Flag for a moderator

Thanks for getting back to me Lisa and sorry for the slow response.  I was away over the weekend.

Have now had a chance to test connection on other online games.  Unfortunately, I don't have PS Plus, so am only able to test F2P games.  I tried the following:

In regards to other devices that might be used at the same time, I'm in a household of two people, so other usage tends to be fairly low.  We do fairly standard things like stream Netflix and browse the internet, but I don't think this is a factor, as I get packet loss when home alone with no other devices in use.  For example, I tested again this morning with no other devices in use and was still getting some packet loss on most of the servers, including the nearest European ones.  When I then connected using the 4G on my phone instead, there was no packet loss at all on the European servers, so it doesn't seem to be an issue with the Apex servers.

Please advise if there's any action I can take to remedy the problem.

I am going to send you a private message now.

Hi, ive been experiencing the same problems as stated by the gentleman above and would like someone to look into the issues of packet loss when gaming on Apex.  Im in the Croydon Area where i experince packet loss of around 2% across all Europeans servers. 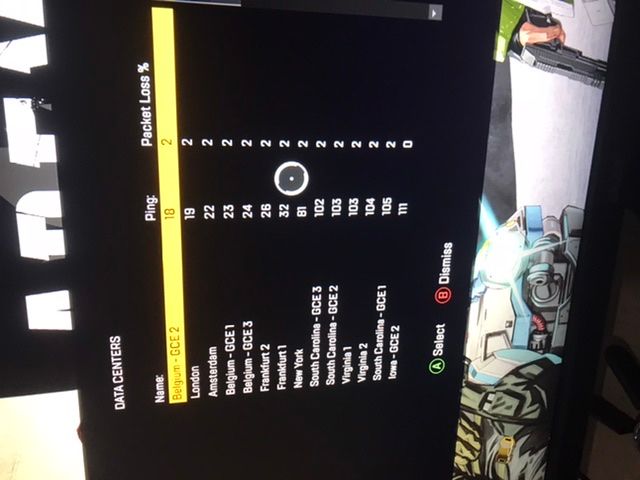 Thank you for your post Sule and welcome to our community.

There's currently no known area faults that may be affecting your services, would you be able to provide your wired speed test results through speedtest.net and also provide your Hub's network log please? Just ensure you remove any personal details before posting these please.