My primary email account, a virgin.net one, stopped working again last night. I use the Outlook for Microsoft 365 email client to manage a number of email accounts. When Outlook was performing its "Send/Receive All Folders" routine I got a pop up asking me to "Enter your user name and password for the following server." The server, user name and password hadn't been changed so I left all settings as they were and clicked "OK". It appears I am locked out.

I tried to access the same account using my mobile phone without success. Next, I tried logging into web mail via My Virgin Media to be met with "We didn't recognise the username or password you entered. Please try again" As far as I am concerned, the details entered are/were correct, so next I tried to reset my password as if it had been forgotten. This brings up a new "Reset your password" tab. I enter the email address that is having the issue and that brings up a new page that asks for my date of birth and the answer to my security question. I enter the details as requested and press the "Continue" button. Nothing happens. I press it any number of times and nothing happens. The foot of the page says "Having trouble? Please contact us and one of the team will help reset your password." I click on the link and I am taken to a page that suggests I call for support.

With a low expectation that this will resolve things, I pick up the phone and jump through the push button option hoops until I get to speak to someone. I describe the issue I am having and get a distinct feeling of deja vu when, as I mention virgin.net, the helper suggests I contact Talk-Talk(!) I mention that I'd had a similar conversation last October, the last time I had this issue, and tried to point out the futility of such an action. While hanging on the line as my helper tried to escalate my case, I eventually rediscovered this community forum via Google. I cannot find a link to here on the Virgin Media help and support page. Eventually my helper tells me that my case has been escalated to another member of the support team and someone will be in touch with me within the next five working days. This does not strike me as being very helpful, particularly as this account alone seems to me to have been blocked at Virgin Media's end. Does anyone have any suggestions as to how I can rectify this situation ASAP please?

@Mr_Crabbit firstly a couple of things, I can almost guarantee you that nobody will call you back within the next five days (or five years for that matter), and probably nothing has been escalated to another team member. This is just a standard VM offshore customer services fob off to get you off the line.

I't nice to see a degree of consistency though re. the TalkTalk story - unfortunately it's consistently a load of rubbish and lies!

However, most important question, are you a current VM broadband customer? If you are, then have you moved or had a break in service since you first joined and/or the virgin.net email address was set up?

@jem101 Thank you for your reply. I am a current VM customer and have been without a break since the tie-up with ntlworld. My first ISP in the 1990s was Virgin Net, I joined ntlworld on the understanding that I could keep my virgin.net email addresses as "ntlworld provides the backbone for Virgin Net" This has proved to be the case with the exception of this one particular email address being temporarily locked out last October. My other regularly used virgin.net address continues to work fine.

I find the situation I am in now frustrating because I cannot reset my password and wonder if there is more to it than an uncooperative web page.

Help please. I am still unable to change my primary Virgin Net account password as I cannot progress beyond answering my date of birth and security question by clicking the "Connect" button.
0 Kudos
Reply

Thanks for posting on our community forum. We do apologise that you are unable to reset your primary Virgin.net email.  Remotely checking the systems from our end, we can see that an IT ticket has been raised on your behalf about this issue already.

Our team will get back to you in the next 5 working days to discuss the outcome of this. If you would like your IT reference number, I will happily provide this for you in a private message.

This way you will be able to check on updates with your ticket, either through the community forums or over the phone.

Thank you for your reply. I had a chat about my inability to change my password with a helpful gentleman from on-shore telephone support this morning. The root of the problem appears to be that my virgin.net email addresses are not associated in any way with my main account (accessed through my ntlworld email address). It also appears that the facility to change passwords to virgin.net addresses is no longer facilitated by the ...my-virgin-media... web page that presents itself for that task. I was able to do this last October, but I suspect the web page has been updated and altered since then. As I may have stated earlier in this thread, my secondary virgin.net email addresses are still functioning and permit me to login for web mail etc. but I can't access the primary address' properties from there.

I am reconciled to waiting for a member of your team to get back to me and hope things can be rectified from your end. I realise Virgin Media as an organisation would rather do without supporting legacy email accounts from virgin.net and blueyonder but I fervently hope they continue to do so. I have been using the email address I'm having trouble with almost daily since January 1997. As I'm sure you can appreciate, I have a lot of contacts gained over a period of 25 years that will need to be informed of a new email address if I can't get this one back up and running again.

Please send me the IT Ticket Number by PM. I look forward to hearing from you.

@Mr_Crabbit right then, you need to work on the basis that the email address is gone and isn’t coming back.

You may be pleasantly surprised and it is restored but I really wouldn’t hold my breath, so honestly start the process of spinning up an different email address with another provider and informing all of your contacts of the new address.

And @jem101's suggestion applies equally to your secondary email address, if that is not directly linked to your Virgin Media account.  Copy all the important contacts while you still can.

I have spent a long time detailing what happened about my case today. I pressed the 'Post' button to be greeted with 'Authentication failed' and the post cleared. It's been one of those days. I may try to post an update again if I can muster the enthusiasm.

I was left a very quickly spoken and mostly unintelligible voicemail last Sunday evening. The only words I could make out were "...Virgin Media..." I phoned the support line early yesterday morning. The lady I spoke to there, while trying to be helpful, changed the password to my ntlworld.com email account while insisting she had changed the password to my virgin.net email account that is having an access problem. This resulted in my email client not being able to sign in to my ntlworld.com mailbox. I explained what had happened and I was given the password she had used and was able to change it back. As we were getting nowhere, and I'd missed last night's call, I was told that she'd have to raise a new ticket and that someone would phone me back, possibly later that day, but within 4 to 5 days.

I'm glad to report someone from support phoned me back yesterday afternoon. I was told the only way I could recover my virgin.net email account was by transferring that address over to my main Virgin Media account. Sounds good I said, let's do that. The support lady then said, if I do that, it will discontinue the current ntlworld.com email addresses you currently have associated with your account. There was no explanation of what would happen to my four currently active secondary virgin.net email addresses. It didn't seem like a good deal to recover access to one email address by trashing three others and possibly four more so I declined her offer. I was told that was all that could be done. I asked would it be possible for me to open a new account and for the email address to be transferred there? She didn't know but said she would transfer me to someone in sales. I thanked her and held the line.

On being put through, I was asked a number questions to establish my identity. I explained, very poorly it seemed, my predicament. I was eventually told it was not possible to open a new account at the same postal address, even using another occupant's name. She would transfer me to someone in support. I thanked her and held the line.

On being put through, this person said it was not possible for her to access my old virgin.net details. I asked, that being the case who can? All of my virgin.net email accounts are being hosted on virginmedia.com mail servers. The server space and electricity is being used, so why is the person responsible for them uncontactable? I explained again that I am unable to change my email account password because, unlike last October, the appropriate webpage does not function. It was suggested I add the virgin.net email address to my account at my end. On logging in to try, it became clear that the only email address I could add would have the domain name virginmedia.com, not useful. I asked if she could please request that someone at her end revises the unhelpful webpage, so that virgin.net users who had "forgot" their passwords could use it. She didn't hold out much hope for that happening anytime soon. Thus ended a 1 hour 44 minute call with me getting no closer to resolving the issue.

It leaves a bad taste in my mouth that I am supposed to just give up and walk away. I have to set up a new email account and inform my contacts to disregard an address I have used for 25 years. At no time was I ever informed by NTL World and subsequently Virgin Media that virgin.net email would be discontinued. I have been a customer without interruption since October 2000, being enticed by the prospect of being able to keep my virgin.net email accounts as "NTL World host Virgin's servers." I make the point again, I appear to have been locked out by somebody, possibly for security reasons. The suggested way to remedy this is to change my password. I am no longer able to do that thanks to an unusable web page. Nobody at Virgin Media can, or will, help it appears. Not a good situation at all. 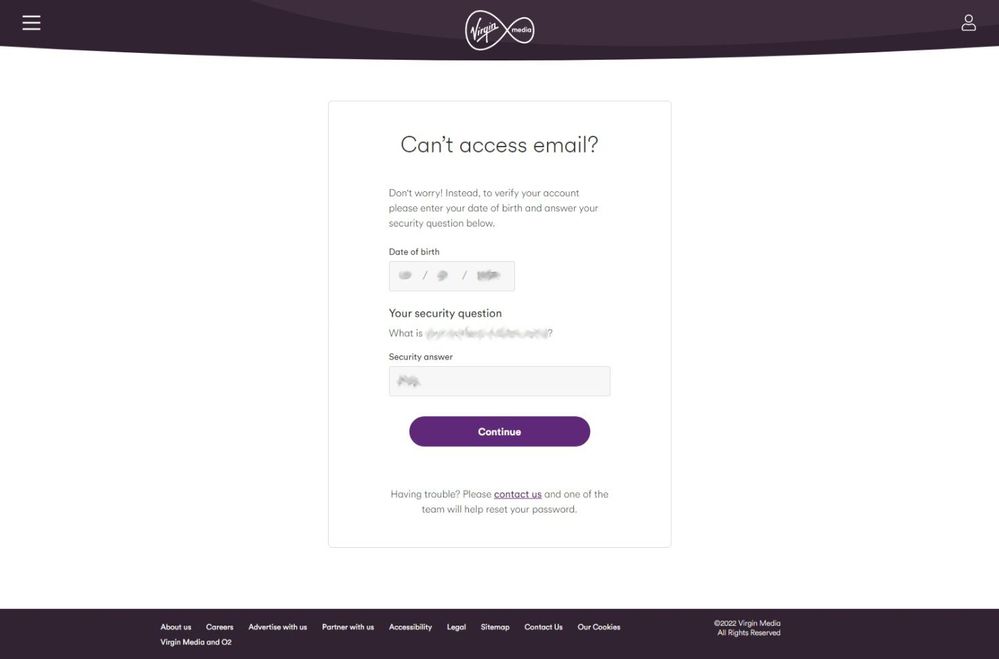