An ongoing issue relating to Gmail, yet to be resolved. Google are zero help, simply referring to their forum.

They say a picture is worth a thousand words, so hopefully this will say all that's needed, even though in the past few seem to grasp the problem.
Pixel 6 Pro & before that 3XL have both exhibited this issue, usually after a Gmail update.
The Gmail account displays the correct profile image alongside. However both the other VM accounts are blank.
Initially, on 3XL, it was possible to revert to the stock Gmail application which resolved the issue (until another u/d), but with 6 Pro the issue may be in the stock application as uninstalling updates makes no improvement.
For some unknown reason both "blueyonder" & "virginmedia" email accounts fail to display a corresponding profile image, though Gmail does as expected.
BUT... when an email is received from a Virgin Media account address alongside it is displayed, as expected, a coloured circle with a letter inside, indicating the first letter of the account name ("V" when Virgin email me).
If only a Gmail account is installed then identifying is easy, but with more than one email account in use it's not that simple.
As this was resolvable previously it seems logical something must have been changed by Google.
This is an annoyance but even worse is the lack of any concern shown by Google!
Are Virgin Media any better?
All the usual (clear cache etc etc) has failed to resolve. 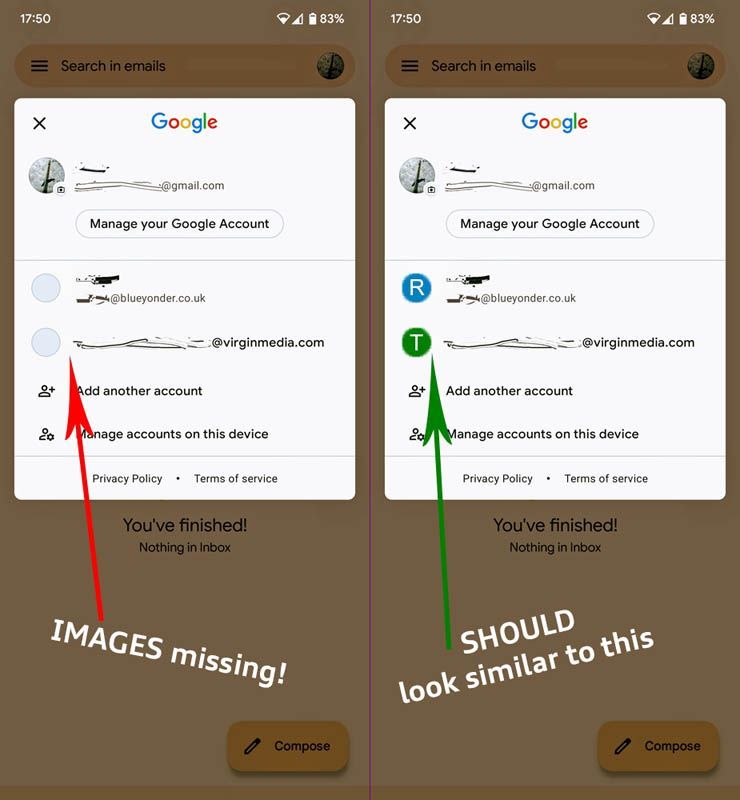 • Is anyone else experiencing this same problem with Virgin email addresses & Gmail?
Tags (7)
1 Kudo
Reply

Re: No profile images - Gmail

Hi @El_Defensor
Sorry to hear your having issues seeing the image on your email.

Unfortunately this is not an issue on our side.  It may be that your Gmail accounts and google pixel phone have a way of doing this, but I would be able to advise sorry. Could you check on another email address, to see if you get the same results?