You should start a thread on the tech natter about all this its very interesting, looking I think you know the larger circles are the battery terminals, but the component in the middle could be the coil that's found in quartz timing watch's to fine tune the accuracy bit it's hard to tell if its that or an early transistor

the only update I have this week is watch news.. nothing from virgin's solicitor...  it's interlude time

I put the watch PCB in a pot of distilled white vinegar.. it fizzed like a mento in a bottle of fizz, for hours..

this neutralized the alkaline in the battery's, stopping any more damage.

the little round thing fell off Kloopk, once the vinegar had eaten away corrosion at the contacts..any wiser now kloopk ?

I thought somebody had soldered lumps on the battery terminals.. that all came off in the vinegar.

electrolysis occurred I think from the battery.....hours of work.

I guessed the CAN at the top would be a timing crystal of some type .. where do you buy replacement parts for old watches ?

Before a Vinegar Bath and After

the lower contact that's all green on the before photo, disintegrated due to the corrosion.

ive started to rebuild it with silver conductive paint,,, it's only had 1 coat so far, few more layers needed.

where is my fiberglass pen when I need it .. arrrrrrrrrrr

Hey Gilly, yeah the Silver thing at the top is a crystal. looking at these photos the unidentified component looks more like a small variable resistor, the bath probably helped it i would attempt to resolder it on and see it it works without the corrosion on it. fingers crossed
1 Kudo
Highlighted

I’m still waiting for Virgin’s solicitor reply……. tick-tock tick-tock
The postman’s just been.. a bag of nothing for me again.
5 months I’ve been waiting for answers, 17 months in total since I complained –
is this normal procedure at virgin? Do they treat everybody like this, or just me?

If virgin’s solicitor has interviewed everybody that visited me, at the rate of 1 person per month..
The investigation would be over by now !!! not even a call to discuss things, i know they have my number….
More delays. After being branded late officially by the ICO you would think they would treat this as URGENT !
0-10 virgin, not good enough !!!

I have had a lovely personal email from Richard Woodward the CEO bossman of “Three” following an email I sent
thanking him for supplying my internet for out of hours essential work.. Not all CEO’s ignore their customers it seems.

So
More watch interlude for kloopk, the trials and tribulations of my first watch repair.
The Commodore 1970’s LED Time Master miss-adventure continues.

I never did find my fibreglass pen. I had to order a new one. That arrived, so I cracked on.
I lightly brushed the trace from the negative terminal with the fibre pen very gently –
As soon as I touched that track, it fell off… Geeeeeeeeeeee
What’s next on the list to go wrong???

It turns out. Anything that was originally corroded green is beyond repair or unusable.
The rest of it cleaned up nice with a gentle fibre pen brushing.
Battery acid has corroded everything over the years. It’s terrible stuff.

It’s the same acid damage my Amiga500 suffered after it’s battery in ram/clock module leaked.
It had been stored in my uncle’s loft for something like 30 years with the clock battery busy leaking…
another awful mess I’ve already dealt with. The 500 lives again !!!
I only recently got it back from his loft, thx unc nice price !!

Unc’s loft hadn’t been kind to the A500’s cardboard box. Nor the clock battery to the amiga.
I fixed the PCB damage then brought another undamaged original (box with handle) to make it mint condition again.

Back to the watch
More silver painting required to repaint the “fallen off “negative battery watch track.
I used “artistic licence” when re-painting that…
angles aren’t easy when your paintbrush is made from a slither of a strip of soft toilet paper rolled between
the tips off fingers to create a super fine paintbrush.

I really could do with microscope at home.. my desktop magnifier was at its limit.
The watch PCB is a tiny tiny tiny thing..to try painting on.

However …….The little round “UFO” survived Kloopk!!!!! lucky eh  ????
I spent yonks with a very fine needle, chipping away the corrosion under a desktop magnifier.
The fibreglass pen removed the rest of the corrosion.

My eyes went south as soon as I hit the great age of 40... GeeK reading glasses for me now…
My distance vision is fine though. I can easy spot a Branson a mile away…I’ve not spotted one yet thow. I have been looking, trust me.

I stuck the watch back together for a test run and…… 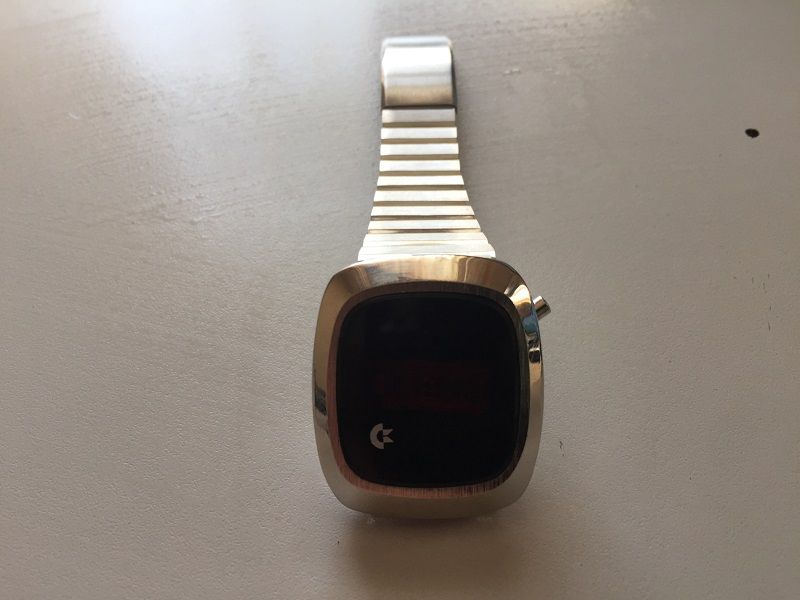 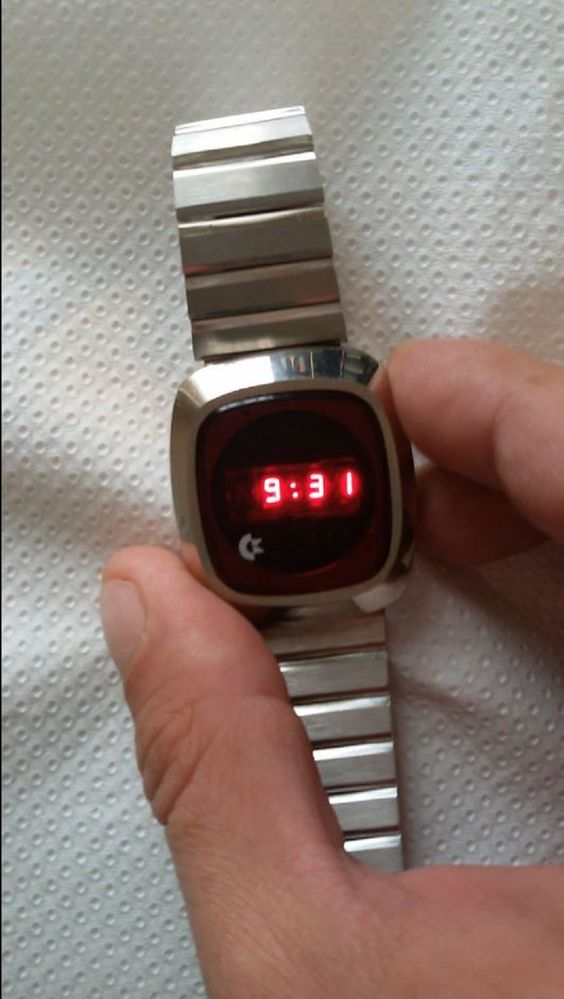 first time…what do ya know???

Another 50yr old piece of Commodore history preserved for another generation to be bemused and amused by.
No! you can’t check your email or step count on it. It displays the TIME & DATE nothing else.
And YES the computer only has 64k but has some of the most addictive games you’ll ever play….

I’m pretty sure my restored 128D is probably the only machine to be chrome plated?
The metalwork had started showing signs of corrosion.. I needed nip that in the bud.
First I thought an acid bath much stronger than vinegar. That should stop any corrosion…
Breaking Bad bathtub time…
Then I thought…

Probably best not to attempt a DIY Bio chemical hazard adventure - ending up with me calling the fire brigade.
I’m not completely bat **bleep** crazy stupid..
Scrap that thought. It’s a Very Very bad idea.
Then I thought let the PRO’s deal with it….Dr google will know who.
That’s how I ended up in a workshop on an industrial estate in Romford with my box of metal bits.

I forgot to say a big thanks to the chaps at KK Chrome plating in Romford for their amazing work.
They did a fantastic job !!!!  They acid stripped all the shielding and metalwork. Then managed to plate everything…..in about a week.
It really looks stunning now I must say ! if your a geek…. And now rustproofed forever’ish I hope.
KK hadn’t plated a computer before... a first for them… bumpers and lights from classic cars all around the workshop when I visited. They don’t get many computer engineers calling..

You can probably tell, I enjoy looking after my things.
I may have OCD  when it comes to looking after stuff – just maybe ?
I’ve recently started shouting “CAULIFLOWER !!!”  and  “BROCCOLI !!!” out LOUD completely randomly.
Do I have florets?

kloopk I’ve just seen the loch ness monster swim past on your fishcam m8 !!!!
nice Tekk.. Did u make that yourself? Is it Wetfi transmission?
My parents have the koi pond in the photos where the 400W UV lamp is turning back time on the plastic case…
I’d like to get him one of those cams for his pond. Details plz..
Howz the sensor work going?

Gilly,,, see ya all next month prob's

sorry i'm late with an update, it's been busy at work we had a system failure...all sorted now..

the solicitor replied  to say -  the manager that visited me, no longer works at virgin. they are still investigating &

At this point Gilly they are just kicking the can down the road in the hope you drop it.

Nothing will happen unless you follow through now with legal action. Which I wouldn't advise. You might get lucky and the cost of the case isn't worth defending so they don't bother and you get a default judgment. But if they do defend you might end up on the hook for their costs.

I did say in my chase letter to the solicitor, after the 28th of this month... i'd be forgoing the little

luxury's in life - loafs of bread - shoes - etc to pay for my own solicitor... coz virgin refuse to deal with the CAB.

i'm left with no other option..oh and contacting BBC's watchdog..press,, media etc

did I see a post from chris @ virgin around lunchtime today...  the post then removed before i could reply to thank him ?

Yes some Virgin guy did respond saying he hopes they can get it sorted soon - or something like that. Didn't note the name though.

I would go down the small claims route first, see if they don't contest and you get a default judgment - that way your limited to costs and can see how likely they would be to contest it. As I say though they might not bother contesting it due to the cost (ie their legal costs vs your claim) and you "win" by default.

why would a nice post like that be removed... does this mean the reverse, they hope NOT to resolve it soon ?

people being nice to me have a habit of disappearing...bath tubs ?

Maybe it was a bolt of lightning!