Hi, 2 weeks ago I upgraded to the Gig1 level. Got a new Hub 4 modem and done the self install. And the speeds are less than spectacular. In fact I would say the speed is around the same or less than my previous 350mb service.

After a few phone calls, they sent an engineer out who changed all the fittings outside and inside the house as well as fitting an inline filter on the back of the modem.

Having done all this, and reset the modem a few times, he ran the "samknows" speed test, which shows 1113mbps to the house but on average only 350-400mbps to the computer. Sometimes I get upto 750mbps. The engineer said that there is a bottleneck between my router and the computer.

So I have replaced my ethernet cables between the modem and computer to CAT6, as well as changing the ethernet card to a 2.5Gbase PCIe ethernet adapter capable of 2500/1000/100Mbps. But the speeds are still showing the same low values.

I also tested the connection with the engineer present using a laptop, and the speed was the same. I have even run the computer with Linux live CD ( to eliminate any window problems ) and the speeds are the same.

So I now considering returning back to my old 350mb connection, unless someone has any ideas? 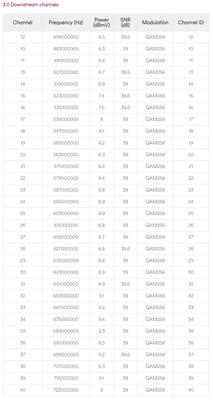 Thanks for your post and for reaching out to the Community Forums, Utukku,

Sorry to hear of your ongoing speed issues. Just to clarify, the speed to the hub is up to spec however the speeds within the LAN are slowing down? Can you try putting the hub in modem mode and running just one wired connection speed test? Let us know how it goes.

Also what did the engineer say when you did the speed test in from of him?

Ethernet cat6 cable from modem to a 2.5gb PCIe card on the Windows 10 high spec pc.

When the speed test's where done with the engineer, he basically said the incoming signal was within limits, and that the bottle neck was on the PC. But that a Hub 5 would be rolled out in the new year, and this may help... And off he went.

After reading a few msgs's on here, I done the 30sec reset, then switched to modem only mode. Completed a few samknows/realspeed tests, as well as the speed test on the virgin site itself. I am now getting 1114Mbps to the modem, and 950Mbps modem to computer.

I would have said yes a few days ago, but today I'm lucky if I get above 400mbps 😞

Sorry to hear you've still been experiencing some slow speeds.

I've been able to locate your account using your forum information, and can see some of the hubs levels are out of specification.

I'll need to arrange an engineer visit to resolve this, before I can I just need to confirm a few more details with you, I've popped you over a private message (purple envelope, top right hand corner)

have replied to pm

Thanks for sending your details over via private message Utukku,

I've arranged an engineer for you, you can view the time and date of your appointment via your online account here

Engineer been out, and has confirmed the speeds coming TO the Hub are excellent, but then from Hub to computer they are dismal. That's after using a new CAT8 cable, 2.5ghz PCIe card. Tried the same with booting from a Linux live cd...speeds the same.

Tried on a separate laptop. and the dismal speeds are the same. So the Hub was changed... but still the same results. After consultation with another engineer, they have agreed it will require the HUB 5 as soon as it's released. So at the moment, I have to suffer speeds lower than I had before my upgrade.