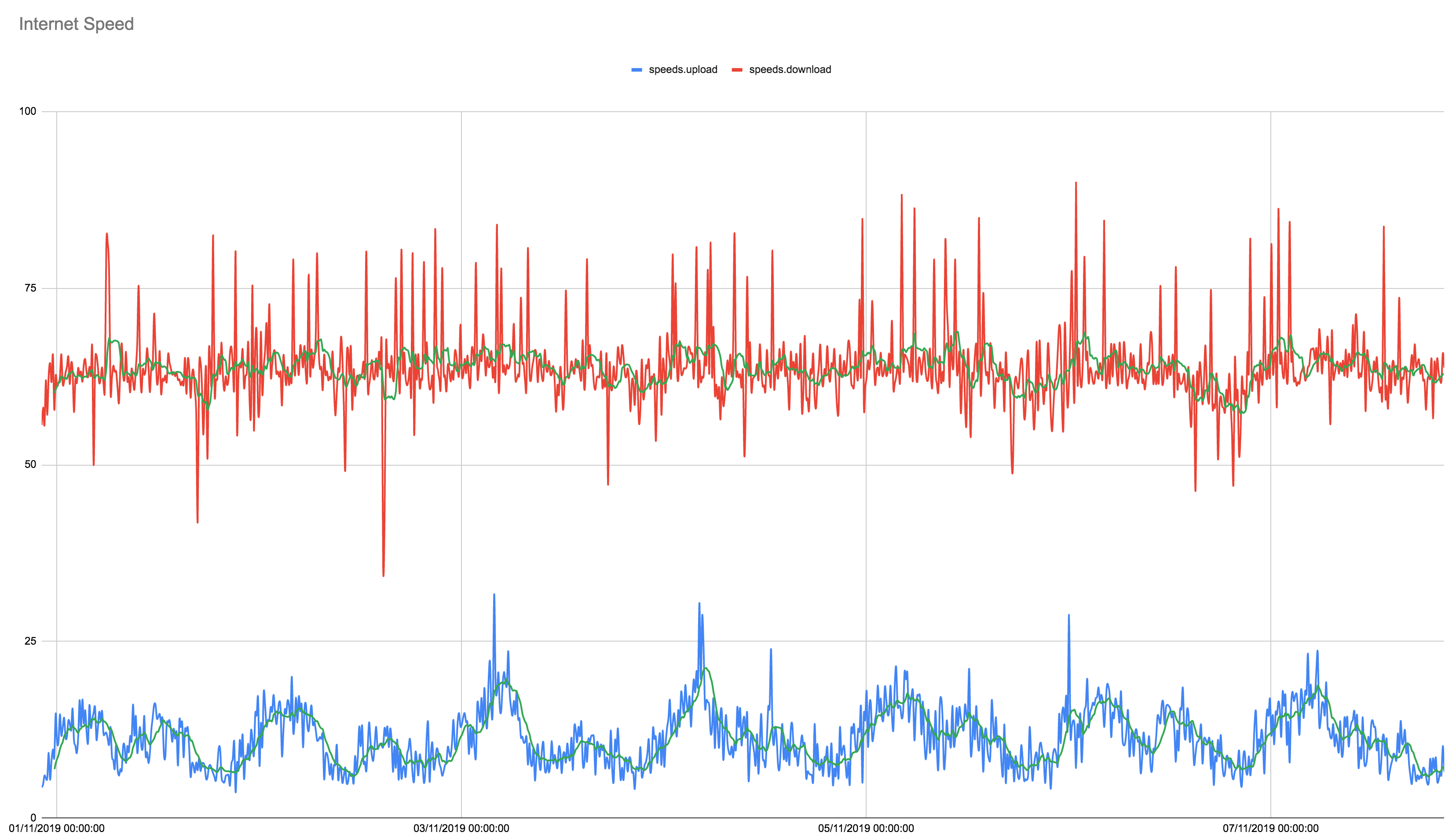 Last month I wrote a script to run on a Raspberry Pi (connected via Ethernet to my router), that performs continous speed testing of my connection.

I did this because frequently I would get intermittent speed slow downs, especially during peak periods. When I complained about this to customer service on the phone they said it wasn't enough evidence to constitute compensation.

Just wanted to post these results here hoping to open up discussion and get some answers as to how I should proceed.

I've just repeated this suggestion to another forum user with problems, because for some reason this poor speed matched to poor customer service that refuse to address the problem appears to be a recurring theme in these forums at the moment.

Just wanted to post these results here hoping to open up discussion and get some answers as to how I should proceed.

So to be clear, you are suggesting that VM are throttling speeds unless the user is running a speed test?  That is a bold statement and doesn't match my experience of the 350Mbps service where I get full speed on Speedtest.net tests and also on my downloads.

How is your script testing speeds? Without this information it is difficult to draw conclusions.  If I was to guess I'd say that you were doing a single thread download and upload, which is not what most speed test sites do.  They use multi threaded tests to saturate a connection.  The Thinkbroadband test does do a single thread test as well as a multi thread test:

Slow downs at peak times could be an issue with oversubscription in your area, but your test is showing slow speeds at off peak times.

Are you sure that your Raspberry Pi is capable of faster speeds?  Ethernet speeds below 100 Mbps can be the result of a damaged Ethernet cable or an Ethernet port that is only 10/100 rather than 10/100/1000.

Its using this module to perform the speed test using speedtest.net servers.

Its using this module to perform the speed test using speedtest.net servers.

So if your script is using Speedtest.net then I don't understand your statement that VM are unthrottling speed tests when in your case they are clearly not.😖

Instead of looking for conspiracies maybe we should start with some hub stats and see if your connection is looking healthy or not.

To get hub stats go to http://192.168.0.1/ (or http://192.168.100.1/ if you are in modem mode) to get the VM hub GUI. Don't login (unless you have a Hub 3 and this is your first visit to the hub GUI, which does require you to login) but instead click on Router Status which is either a button in the top right of the screen or a text link at the bottom of the screen depending on which hub you have. Click on the Downstream, Upstream and Network Log sections and copy & paste the figures from those screens and post them here, don't worry about the formatting or you can post screenshots if that is easier. If using screenshots be careful to edit out or obscure any reference to your WAN IP or MAC address in the log to protect your privacy.  If you copy and paste the log then the forum will automatically censor this sensitive information.

The community can have a look for you and see if anything in the figures looks wrong and advise accordingly, or you can wait for the forum staff to get to this thread in a few days and they can run checks.

Can we please confirm that you've checked the cables which go into the back of your Hub are fully secure?

If after reinserting these the issue persists please let us know and we'll need to book an engineer appointment to investigate further.