It would work on your mobile hotspot for now as I'd imagine that these bans don't happen immediately you connect to an IP with an infected device.  Also, did you have every single one of your devices connected to the hotspot?

If we set aside the malware possibility, despite the letter from VM, the other likely scenario is that you have an IP that was abused by someone else before it was assigned to you.  When you got the new hub you would have been assigned a new IP address, as they are linked to the hub's MAC address.  If that IP address had been banned while assigned to someone else then you would have unfortunately inherited that ban.  If you hadn't had the malware notification from VM I would have said this was the more likely scenario.  As I have said these bans are temporary so if this is the correct scenario then things should go back to normal in a day or two, as they already appear to have done with the RBS group sites.

A Windows update is unlikely, but you can test that theory by trying to access one of the affected sites via a non Windows device connected to your VM router e.g an Android or iOS mobile phone.

I think I mentioned previously that we tried my Android phone with it's VM wifi turned off and it worked, whereas when it was connected non would work on it. So, it's like this

I received my new router on the 4th of Jan it's now the 12th. That's more than a few days. I had problems back in June last year and had an engineer out. Now this not to mention the outages and lack of service. I spend far too much of my life sorting Virgin crud out. I'm either on the phone or rebooting the router etc. I'm now off to bed and looking forward to another day taken up trying to sort this problem. G'night all.

Yet again, 2nd level tech team or whatever they are rang to tell me this problem isn't Virgin media and that I should talk to gadget rescue, whom I have to pay if they resolve it. Also, would I like them to close the ticket down as being resolved. NO NO NO! How many times do I have to say it? I've asked her to put me through to complaints so I can ask for a deadlock letter. She just called me back with a complaint reference. I just want to take this opportunity to clarify something, I will not use Gadget Rescue in this case because before my new router I only had problems with getting online and wifi dropping signals. I was able to do my online banking. When I installed the new router we had problems getting it to work. When this was eventually resolved, I then tried to do my banking online and found 4 web sites I was unable to log into. 3 Banks and one forum. I have along with Virgin since then, tried resetting Chrome browser, login in using Chrome and Edge, using three different types of machine, connecting with and without using VM broadband and with and without my firewall. The only time I cannot login is when connected to VM. It therefore has to be something with my broadband which Virgin supply. Unfortunately Virgin are adamant that it is not their fault. But before I changed router it worked! The only thing that has done anything was changing over to modem mode and wire connecting to my router. I could connect to NatWest and Tesco but not Halifax and Moneysaver forum. Now here's the thing, I don't mind paying for support when it is needed and is possibly my fault or my settings but nothing has been changed other than a new router supplied by Virgin. I'm only going by logic here but if it worked before the change and not after and then worked again when the change was disconnected, surely it is the changed item that is causing it? This incalcitrant attitude of Virgins has lost me the will to live. I know it sounds dramatic but I've had 5 heart attacks, suffer heart failure and for the first time in God knows, I had to use a nitrolingual spray due to chest pains brought on with the stress of all this. It's not a question of email or browsing but about doing my banking and making sure I can pay my bills. I don't have a local branch I can just pop into. What if it had been someones Universal credit claim that they couldn't access all of a sudden? That has to be done online. 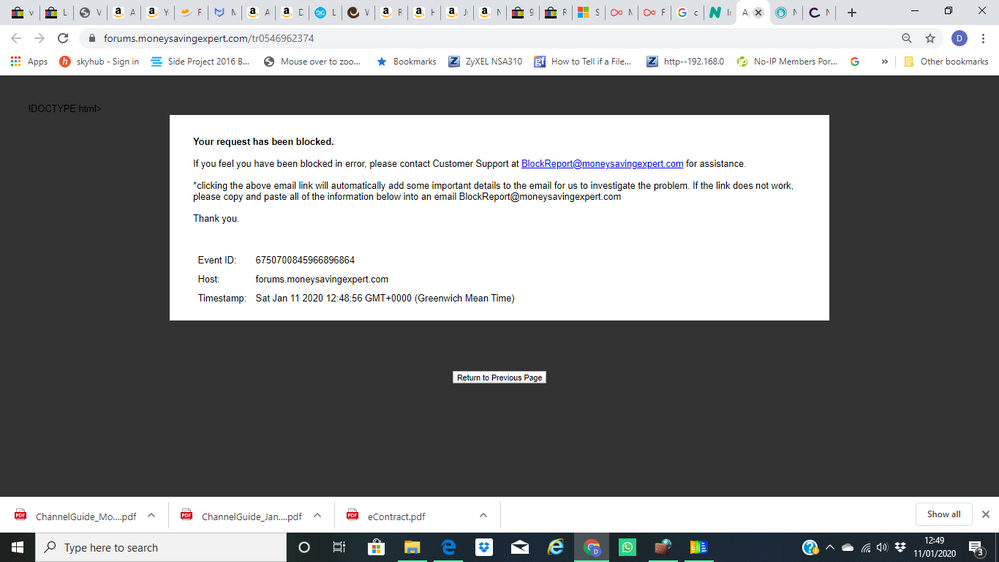 Awaiting a response as only had an email point of contact.
0 Kudos
Reply

Just had a reply from MSE copy/pasted below;

Thanks for taking the time to get in touch with us about this issue.

Unfortunately your IP address has been temporarily blocked after being highlighted by our automated security system as a potential source of unsafe traffic.

It's usually nothing to worry about and it's not likely this is related to your device or network, but unfortunately occasionally our security system will block genuine traffic too.

Unfortunately we are unable to remove this block manually but hopefully the difficulties you're experiencing will be resolved soon (usually within 24 hours).

If this continues or as you mention is consistent across several websites, you may want to ask Virgin about this. . You can contact Virgin here: https://www.virginmedia.com/shop/contactus

Please accept our apologies for any inconvenience caused.

But it's not Virgins fault! So why do they tell me to contact Virgin?
0 Kudos
Reply

The top10 european banks include – Santander, Lloyds/Halifax and Barclays. RBS is generally ranked about number 12 and includes NatWest and Tesco. Akamai’s website claims “10 of the top 10 European banks” as customers. If we guess that RBS is a customer also, then ALL of your banks have blocked your IP address as a result of “intelligence about suspect addresses from Akamai” - and probably from many other sources as well - which the banks will decline to disclose. Basically, they are all using the same or very similar lists of information. That’s why you find yourself bounced from all bank sites at more or less the same time.

The most likely reason for this is that your home network has been compromised. Gone are the days when we only had to protect our PC. This is now all about – the Internet of Things (IoT for short) and the recent veritable explosion in intelligent devices which can be connected to the home network today – and many of which can be hi-jacked for nefarious purposes.

“It was revealed that though there is a range of connected devices from computers to smart televisions and kitchen appliances, 47% of the most vulnerable devices are security cameras installed on home networks, followed by smart hubs (15%), like Google Home and Amazon Alexa, and network-attached storage devices (12%).” I note that you have a significant number of these on your network.

The most common form of smart-device compromise is to use the device to send spam (it’s called a spambot). This does NOT use your email channel. It bypasses that and sends it out directly through your router. If it was doing that 24x7 it would be easy to spot so most spambots are configured to go to sleep and wake up at intervals to reduce the chances of detection. Note that the interval can be hours or even days. Other variants can be programmed to scan your system(s) at intervals to find any “interesting” data such as site passwords etc and forward that to “home”. But, sooner or later, YOUR IP ADDRESS will be flagged as a source of spam to many interested parties.

When you use your phone (with wifi OFF) for internet access you are using a completely different network from the VM network – it’s the phone 3G/4G network. So, if that has not yet been flagged as a suspect source, connection will succeed. But if you repeat that regularly that will also become blocked in due course.

So, where do you go from here?

The first step is to check your network for unauthorised outgoing traffic. I note that you have used TrendMicro products thus far - https://www.trendmicro.com/en_us/forHome/products/homenetworksecurity.html?_ga=2.22561535.530447843....

but it’s literature does not contain the words – Alexa, CCTV or spambot – nor the detailed configuration instructions, so I would be reluctant to rely on that. In this post -

you will find how to run the detection process using Wireshark. Note that this could take several days.

Secondly, the block on your address by the bank(s) is NOT generated by VM. You should go back to them and demand to know the reason WHY your address has been blocked.

Note that sites which you are blocked from will frequently tell you it’s VM’s fault just to get you off the line. They are measured by calls answered – not calls SOLVED.

Wireshark is on and running and telnet confirmed running. I'm going to leave it running all night and then look at it again tomorrow when I can.

Just one thing occurs to me, why didn't someone do what you did several days ago? Yours is the first piece of helpful information and insight into the problem that has been offered in all this time. All anyone wanted to do was stick their heads up their [removed] and blame the other party rather than say, hang on, this is a paying customer and he needs HELP! Both Virgin and the banks.