I upgraded to 1Gb yesterday to take advantage of the 3.1 rollout - but have now discovered I have no 3.1 channels connected. I am using the hub as a modem, and speed tests show 700/50.

I contacted support who told me that I only needed DOCSIS 3.1 channels if I was going to connect a telephone to the hub - otherwise the lack of 3.1 channels would not matter (she was absolutely adamant about this 🤔). I decided to bite my tongue. She said I needed to leave it for 48hrs and then come back to them if I still thought this was a fault.

Any advice as to how to proceed? Really don't want to have the same conversation with Level 1 support again....

Many thanks for any help 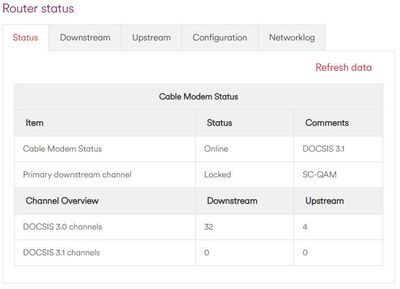 Andrew-G
Alessandro Volta
1,842 Views
Message 2 of 15
Flag for a moderator

700 Mbps is about the fastest that you can get through a VM hub on DOCSIS 3.0, so the absence of a 3.1 channel is material.  And you're right, its got nothing to do with telephone lines, the support staff just make things up when they don't know - I suspect it's a cultural thing that they can't bring themselves to say "I don't know", plus local management pressure to chalk up calls as resolved by first line.

I've flagged for staff to take a look and comment.

Hi @dsotm44, thanks for posting.

Really sorry to hear the upgrade to 1gig hasn't gone as expected Further to the helpful advice from Andrew-G above - I've taken a look into this from here today using your forum info, and it may not be related but at the moment there is a known SNR issue in the area which is currently estimated to be resolve by the end of the day.

We'll need to arrange an engineer visit to get the hub/1gig sorted, but I can't arrange that while a known area issue is ongoing. I will check for an update tomorrow and get back to you so we can get things sorted asap.

Many thanks for the quick response and information/help 🙂

I did note one other thing when I did the Realspeed test - while my DL was 580Mb, my network speed on direct ethernet from the hub to my PC was only 280Mb. I am using Cat6 and have a very new Rog Strix mobo with an Intel 1Gb LAN port. Would this speed reading have something to do with the Intel Puma chip on the SH4? I have not heard great things about it.....

I have a hub 4 and can reach subscribed speeds via Ethernet, so I don't believe the hub will be the cause of that it's more likely to be the issue in the area that's still ongoing. We'll ensure everything is checked over once that issue is deemed to be resolved.

Andrew-G
Alessandro Volta
1,772 Views
Message 6 of 15
Flag for a moderator

The Puma chip gets a bad press due to earlier bugs, but the low level firmware changes that Intel developed and were rolled out well over two years ago have all but eliminated the original flaws in the affected (Hub 3) processors, and the versions in the Hub 4 post-date the earlier defects anyway.  The original faults in the Hub 3 due to Puma were real, I experienced them myself, that is all history now and my (unchanged other than firmware) Hub 3 is a model of as good behaviour as feasible on the analogue DOCSIS technology.  Even with the flaws, they wouldn't have contributed to low speeds anyway - the problems were to do with latency (ping, if you prefer) and in that respect the Hub 4 is, at its best, very impressive for the DOCSIS technology that VM use.  The Hub 4 is more demanding of good connection quality than previous hubs, but it has a notably lower peak latency, and makes better use of network bandwidth.   For the past couple of years I've steered clear of the Hub 4, largely due to non-Puma bugs, but I think with current firmware it is now a solid choice.

At the risk of being inflammatory, the small number of noisy bleaters who continue to complain about the Puma faults and "bufferbloat" should try a tinfoil hat to protect themselves from harmful radiation.  Helpful hint for tinfoil hatters: Make sure your hat is properly earthed at all times, by running a wire from the hat to both shoes to ensure continuous grounding; Do not skip or jump to ensure one foot is in contact with the ground at all times.

jhuk
Problem sorter
1,762 Views
Message 7 of 15
Flag for a moderator

The Firmware for the HUB3 did nothing to fix a hardware flaw that cannot be fixed but move some of the workload off the main Chip and onto the WIFI Chip to make the ThinkBroadBand Broadband Quality Monitor charts looks prettier, it is not a fix but a Band-Aid.

The HUB4 has the same flaw but as it is more powerful it effects it to a lesser extent.

Thanks for the update on Puma- good to know its been improved.

It's not the internet speed that concerns me, am sure that will be resolved once 3.1 channels are fixed. It's the reading of the speed between my hub and PC that concerns me - surely on a direct Cat6 ethernet with 1Gb ports on each side I should be getting better than 280Mb?

@dsotm44 as the wider area issue is now deemed resolved and you're still having issues with the hub - I've booked a visit with an engineer so we can take a closer look into it.

You will find confirmation of the appointment via your online account (virg.in/myVM) and can reschedule from there as well if needed.

Please keep us posted with how that goes, or let us know if we can help with anything else.

Many thanks for the help and assistance in getting the engineer visit!