Hi, My internet (package M200) which I had from oct 2020 was working fine with the same sort of usage that we are using now, has been dropping out since the 21st july with no reason.

Called Virgin who sent an engineer on 24th who checked the line and replaced the modem (apparently with a  refurbished one). Still had problems so called again 25th July, we were told that they would try to send some settings and would escalate the fault. Still having the same issue but problem getting worse so called again on the 28th July.

We were then told because the fault had been escalated, that they could not do anything until 6 days after this date so call back then. Called on the 31st July and was told that there was no escalation recorded on the account, which obviously infuriated us considering that we have had intermittent internet for over a week already by then, also at this time we raised a complaint due to the fact that the problem wasn't sorted and the bad customer service that we had received. We we told that we would receive a call to my partners telephone from someone in complaints within 72 hours and we would see an engineer on the 4th August.

I then received a call on my phone 3rd August from 0345 454 1111 which I couldn't answer (instead of my partners phone as they should have) I then called 150 and explained what had happened, they then preceded to tell me that they could give me more internet speed at a cheaper cost. I explained that I was in work and couldn't talk about this and considering that I have a complaint due to the internet not actually working why would I want a product that didn't work.

They yet again sent another engineer who came on the 4th August who checked the line, changed the splitter, went outside cleaned the port and aligned the pins inside the port. Around 2 hours after he left we were still getting the same problem. So yet again another call was made on the 4th and we were told by two separate people that we were heavy internet users and needed to upgrade to M350 and have a Virgin pod.

We have been on M200 since Oct 2020 with around 500gb of usage per month and this was absolutely fine until the 21st July, so why now are we heavy users and shouldn't we have been having this issue long ago?

On the call made on 4th August after an hour and two operatives spoken to we were told that the heavy usage that we were using was the problem and the operative wanted to send us an intelligent pod to try to see if this worked. I was told that I would get a credit for 3 months for this to see if this fixes the problem (wasn't expecting it to as it's not wifi that we are losing and I have never had any blackspots in my home). We put this in for 24 hours to bed in but still getting the same problem.

Oh I also found out that during the conversation about trying to see if the intelligent pod would work not once was new contract mentioned, when I went to look to see how long ago I started my M200 contract this was when I noticed that apparently I had started a new contract (which I will be looking into)

7th August I tried to get modem mode to work but had a problem (hence the longer red block on my monitor picture) but today we have managed to use modem mode on the router and still getting the same problem.

I have been monitoring the problem since the 1st August as I found the monitor and I really hope someone can please help me. 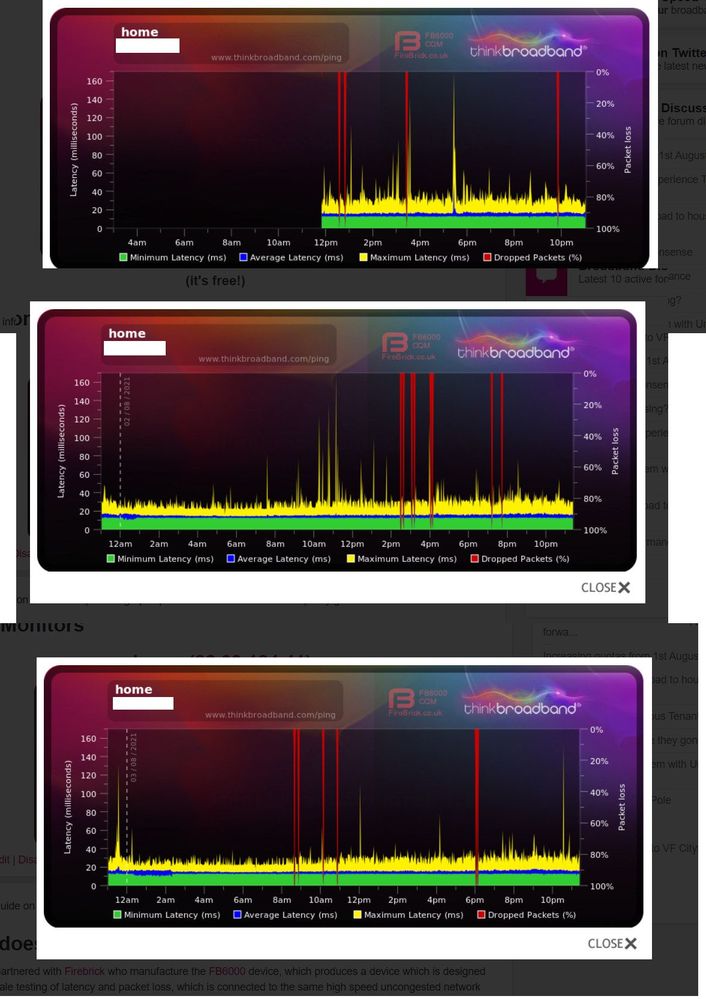 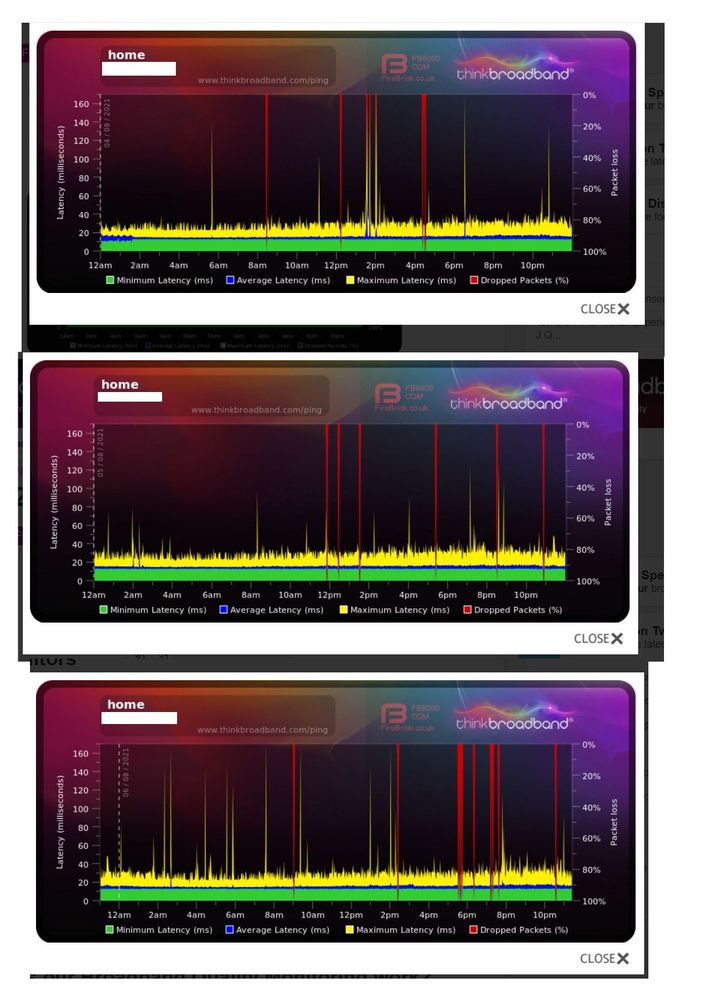 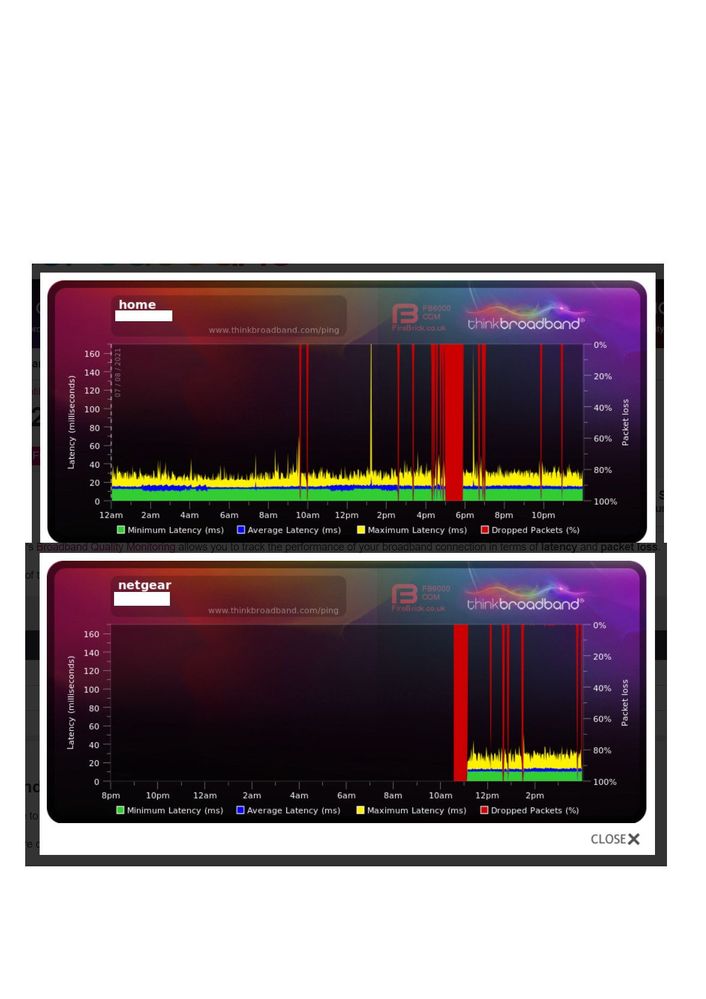 The BQM's definitely don't look healthy - browse to your hub on  http://192.168.0.1 - don't log in, click Router Status - copy/paste the tables (as text - not screenshots) from the Upstream, Downstream and Network Log tabs back to this thread - you'll need multiple posts for this, the info wont all fit into a single one..

All of your power levels look fine and the network log isn’t showing anything of concern… strange one. VM will get to the thread in a couple of days to comment, but there’s nothing obvious wrong with the connection - perhaps an issue with the hub itself… will need VM to comment..

Thanks for looking at it.

Do you know if the details that I copied for you make a difference if I am in modem mode?

I have been in modem mode since yesterday, this is helping a bit as it's not dropping so much, but still have the problem where the router restarts itself and means I am getting much slower speeds than I should have.

Thanks for looking at it.

Do you know if the details that I copied for you make a difference if I am in modem mode?

I have been in modem mode since yesterday, this is helping a bit as it's not dropping so much, but still have the problem where the router restarts itself and means I am getting much slower speeds than I should have.

Thanks for your post and welcome to the Community Forums, Michellefrombri,

Sorry to hear that you have been having connection issues. How has things been since your post?
I have run a remote diagnostic and seems you have tech visit  booked, you can view and manage appointments here: https://www.virginmedia.com/help/virgin-media-manage-engineer-appointment
Let us know if you need any further help.