For someone who streams and games for a living, this has been a big **bleep** issue for me as I have not been able to do any for the past 2 weeks. I've gone from trying so many different things to fix it. Changing hardware on my PC, switching out ethernet cables, even routers. Nothing helped.

This issue we're having is 100% to do with our local head end. The area 15 head end. Now it could be the head end itself has an issue, or the poles between us and the head end. Either way, it's a long and expensive process to fix, and ISPs tend to brush customers off as much as possible and delay fixing this as much as possible so they save themselves money. If there's only one customer complaining about this, they won't do anything. However, seen as there's a bunch of us experiencing this problem, we can all actually do something. You're not going to get an answer on here on how to fix it. We can't fix it, it's all up to Virgin at the moment. What we can do though is nag and annoy the **bleep** out of them by calling up their service team and telling them that there is a KNOWN issue that multiple people are complaining about, and if they CONTINUE to deny it, you tell them the proof is all on their own website on their forums and you tell them to check out the forum for themselves, and make sure they log it and mark down that there is an issue in area 15.

If you happen to get one of those employees on the phone that offer you no help, don't waste your time, lock off call again. If you call multiple times with no help, ask to speak to a higher up, like a supervisor. I personally will be making MULTIPLE calls tomorrow to make sure they fix this.

We all have to be as harsh as possible, with threats to change broadband companies because the way we have been treated isn't right, two weeks with unstable internet that looks stable to the casual user is straight robbery. For us gamers, we see the big problem because we game and we require a lot more. Everyday it's getting worse, it's just a matter of time before we lose connection completely.

These are tests I've run which show CLEAR evidence that there's an issue with the connection. I've run these tests on MULTIPLE PCs too, all the same results. You guys can do this too on your PCs, it's called pinging. Below are a few screenshots of the evidence:

http://prntscr.com/m2cvyv - this is a continuous ping and everytime you see "Request timed out." that is the ping being sent from your device, but it not being received and sent back on time from your ISP. The reason it doesn't disconnect us is because it reaches eventually, but it fails a few times and finally manages to come back to us, that's called packet loss.

http://prntscr.com/m2cwno - This is another program I used called PingPlotter. I pinged google here. As you can see Hop 1, 2, 4 and 7 are completely missing and every other hop has packet loss. (You can see the packet loss under "PL%")

http://prntscr.com/m2cx6o - This is an infinite ping, once again, sent this time on my Macbook, as you can see just before the "Request timeout" message the "time=" spikes up from 15.073 to 231.654 and instant packet loss. (This screenshot is just proof that it's not the hardware on the PC I'm running tests on, and it happens on other devices too.

http://prntscr.com/m2cy94 - Another ping sent on my PC, however not an infinite one. This sends 4 packets, received 3 and 1 was lost, causing a 25% packet loss.

http://prntscr.com/m2cyof - Here's also Virgin medias OWN website which all us Virgin members can access using http://192.168.0.1 telling me that I have a problem with my network. This was completed today, again, after switching to the new router that VIRGIN themselves, sent me.

http://prntscr.com/m2cxvd - Here's some more proof that, the program that I use called OBS to stream, doesn't work either with almost 700 frames dropped in 11 minutes of uptime.


We all pay a lot of money for our internet services, and a lot of us have also been with other broadband providers in the past too and I'm sure we can all agree we've never experienced something like this/as bad as this. It's important that if we want this fixed we all have to make complaints together otherwise they will brush us off 1 by 1 individually until we stop calling and they're bothered to fix it in their own time. Two weeks with scuffed internet is more than enough, it's time we get this fixed and the internet in Area 15 goes back to normal ways by the weekend.

Lastly, if you can, do all these tests yourself, show me your results. Open up CMD on windows, and type "ping 8.8.8.8 -t" and let it run, screenshot your results and post them here. If this isn't resolved in the next few days, I'm personally switching to another broadband. Virgin Media definitely provides the best speeds, but I was BT previously and never, ever, experienced issues THIS bad.

Good post!! I have spent close to two hours on the phone to them today, and will repeat that tomorrow it’s shocking that they can get away with this.

virgin need to give us an answer on wth is going on.. also why are the mods here not getting involved ? Surely they should report this level of activity to some one along the chain ?

This youtube explains pretty well what our issue is and how ISPs usually handle it: https://youtu.be/tf8egy2fADA?t=523 I've time stamped it but just incase it doesn't time stamp, skip to minute 8:43. He explains what we're all experience, and how ISPs try avoid it as much as possible, hence why it's been this bad for 2 weeks, until the ISP is literally abused by a individual customer or a bunch of customers to fix it. The tech team we talk to on the phone will CONTINUE to say nothing is wrong. It came to a point where I would phone multiple times and they would stay silent because I knew more about their job, than they do about their job. I was telling them what was wrong, and what they could do, but they kept replying with "I'm sorry, there's no issue coming up on our end" completely hopeless. I'm not resting tomorrow or stopping the phone calls until I get an answer or I get to speak to a higher up in order to get an answer.

The mods of the forum know whats up, that's why they're not replying. They only reply when they know it's not their fault. The moment it is their fault, they won't show face.

Also, pretty sure we can all get compensation for this. A lot of us have been experiencing this for two weeks straight. Like I said, we all have to bug them on phones, live chat, email whatever, and make sure we all ask for compensation because for someone like me who relies on the internet for my living, this has been a big pain in the ass.

Londonjo
On our wavelength
1,959 Views
Message 5 of 98
Flag for a moderator

Finsbury park N4 here, same problem as you and everyone else in area 15 . Games unplayable online for 2 weeks now. Just want to say thanks to you and everyone else ringing Virgin trying to get sorted. It's widespread across Hackney and Islington. Been a customer since Telewest days, tv, phone, internet . Going to cancel the lot asap if this is not given the attention it deserves in the next week. And will be warning everyone I know to avoid Virgin going forward .

Yea they have credited my account for 3 weeks, also the customer service rep told me after 30 days if your issue is not resolved you can cancel your contract and don't have to pay, so bear in mind we are coming close to 30 days now so you can change your provider
But make sure you phone them and tell them that because they will try and say well you only told us about this problem 1 week ago
0 Kudos
Reply
Highlighted

I mean, Virgin provides the best speeds for me. I can switch, but I'd rather not. Virgin media isn't throttling us, which is good. It is a problem, somethings broken, the only issue is they need to not deny and stop denying if they are denying that there is a problem because there 100% is.

Before this, I've never had an issue with Virgin. However, like I said, we all need to phone them, can't just be a select few. We need to make sure we mention the area we're in, tell them how MULTIPLE people in our area are experiencing problems and how they will be receiving phone calls from other people in the area too. We gotta show Virgin that there is a problem, the more people that phone to complain the more serious they take us.

Don't wanna make it sound or seem like some sort of protest, but like I said, ISPs tend to not listen unless a mass of people complain. Get on the phones today, if you talk to someone who is giving you the "im sorry" or "im not sure" answers, just lock off, call again until you get someone who will actually help.

Here is my screen capture of my ping, for future ref 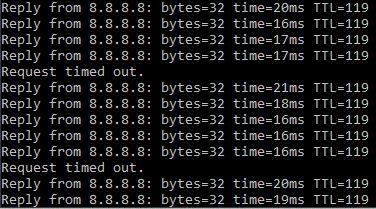 apcyberax please mate this forum isn't about terms and conditions we are just trying to get our internet working properly, please if you are not having any issue and have nothing constructive to say no need to get involved.
1 Kudo
Reply