mkearley
Joining in
1,045 Views
Message 1 of 8
Flag for a moderator

My V.M. webmails has blocks of missing emails & others that are scored through. However the missing emails are shown correctly in my MS outlook account. I contacted V.M. through 150 & was assured the problem was being addressed & that everything would be back to normal by last Wednesday, 2 days ago. My problem is that the missing mail  is also absent from my iphone & ipad. When is this problem likely to be sorted?

Did 150 offer a fault reference number?  If Virgin Media are indeed dealing with the problem then they should have one.  Personally it sounds as if they didn't have a clue and decided to fob you off.  (Note: this is a personal opinion)

I was trying to rack my brains as to what is happening.

1. Mails are missing from IMAP accounts.- on iOS devices.
2. Mails are struck through in webmail.
3. Missing mails are visible in Outlook

My first thought is why would the mail still be visible on Outlook - I'm guessing that this is set up to use POP3 rather than IMAP (no don't change it at this point, that may have actually saved you losing the mail completely).

Can you confirm this?

Hi Tim, thanks for your reply.  I can confirm that the account is a POP one, fortunately in this case!

I initially took my phone to the local Genius bar where they confirmed that there was nothing wrong with it & that the problem lay with V.M. webmail. When I phoned 150 the agent did not give me a fault reference number, she just said that they were aware of the problem & that it was expected to be resolved in 48 hours. That was a week ago!

I don't think you're going to like what I have to say but I think there are two issues here.

I'm going to explain my reasoning.  Lets start by explaining how deletion works on IMAP, this applies to moving files as well - as there is no move command - instead a copy is made of the original in the new location and then the original file is deleted.

Deletion though is a two stage affair.

Mail that is marked as deleted, but not yet expunged is shown with a Strikethrough in webmail.

Now Apple thought that it would be really nice to allow users to rapidly delete a mail by swiping the list item all the way to the right, in fact while writing this thread I actually did just that.  However when I deleted the mail it was also deleted from the server.  So the Expunge command appeared to be working just fine.

However I did some searching and found this:

Look familiar? - Note that this is with Fasthosts though and not Virgin Media.

Have a read of this comment from that thread:

Ah, that's interesting. I missed that little detail in your question. It would appear that when online the iPad client issues an expunge automatically when a message is deleted but it doesn't do it when syncing up after a period of being offline. I couldn't say why it does that.

Now I'm not one to take such things at face value.  If I'm giving advice I like to see if I can indeed reproduce the same effect.  So here's what I did.

Put the iPad into Airplane mode
Deleted a mail from my blueyonder account on the iPad
Put the iPad back online. 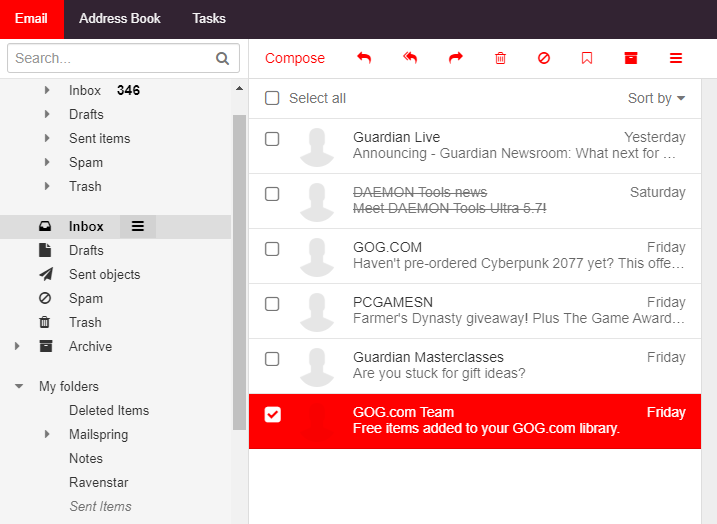 If you do have an IMAP client that supports showing mails that have been marked for deletion then it IS possible to save the mails however, do not delete any other mails while you have mails in this state as the strikethrough mails may be expunged too.

I'll use Outlook as an example.

Go to the view menu: 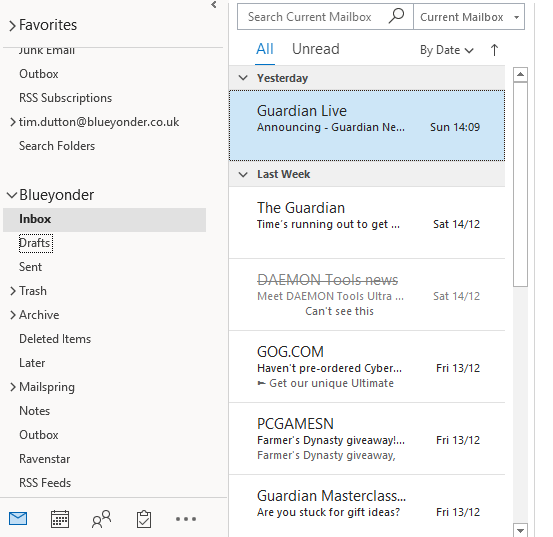 At this point I can right click the message and select Undelete.

Hey presto - no more strikethrough - but I do have the extra copy in my Trash Folder still. 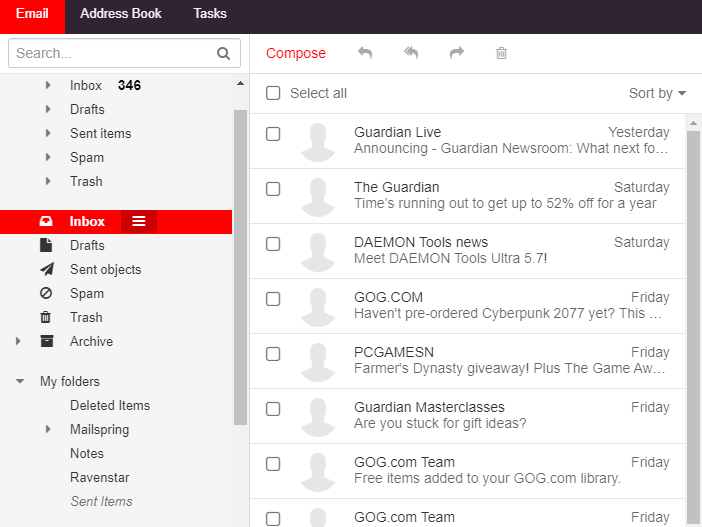 Edit:  I do hate how the customer service reps for virtually every company seem to have the same remit.  "Blame someone else" or "Say anything to get rid of them!" (My own thoughts based on experience)

Things would go a whole lot better if the people who are tasked with helping people took time to do some digging instead of just fobbing people off.

Thanks for your very comprehensive reply, it is not the first time I have been given the 'brushoff' by V.M. when the agent cannot be bothered to investigate a problem. It is easy for them to state there is a problem, but that they are working on it & it should be solved in x hours!  When it isn't & you phone 150 again the chances of getting the same agent again are remote!

I have over a years worth of emails that have been deleted from 2 phones & 3 ipads, & interestingly the missing dates are not identical on these devises.  rightly or wrongly, I rarely delete any emails from the apple devices, in fact I do not know how to bulk remove over a years worth in one go!  However I do 'housekeep' my emails on my pc. It is fortunate that this is a POP account otherwise I would have permanently lost thousands of emails!

If the dates of the missing mails are not identical on each device, then that is further evidence that it is not the server to blame.

It would be interesting to see the actual setup of each device, as I suspect that either the iPhone or the iPad is also using POP3 as if they were both using IMAP you'd see identical mails on each device.

BTW - Virgin Media aren't the only ones giving you the brush-off.  IMHO the Genius bar staff did so as well.

Do a Google search for iOS missing email <insert email providers name> replace the text with the ISP or email provider of your choice, and you'll find that this issue is not just limited to Virgin Media.

This is not something I would expect the 1st line agents to have any clue with - this is normally the sort of thing that would require an escalation to Gadget Rescue, but I wouldn't expect them to figure out what's going on, so don't waste your time.  The current Forum Team are still finding their feet, but this is probably something that even well experienced 2nd line agents like those we had at Swansea would struggle with (and some of them were extremely knowledgeable when it came to email matters - (I miss Jen & Nic :()

There are some possible settings in iOS that MIGHT come to your rescue, but I cannot guarantee this.  ANNOYINGLY they are in two very different places. 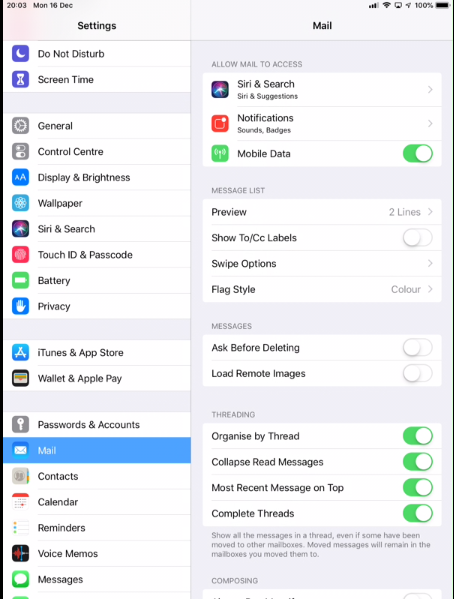 There is an ask before deleting option which by default is off.

Also in the actual IMAP account settings there are some advanced options.

Tap Settings-> Passwords and Accounts on the left.

Then tap the relevant account.  Then under IMAP ->Account tap your email address to bring up the IMAP settings. 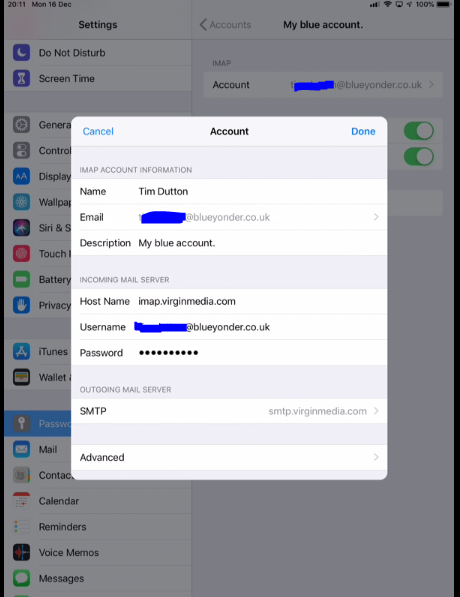 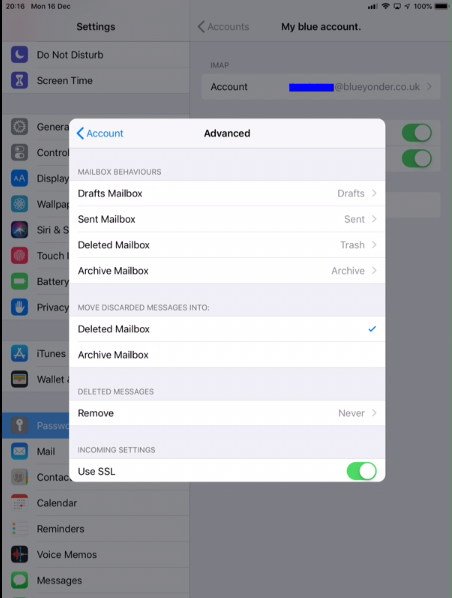 Tap Deleted Mailbox and make sure that it's being saved to trash on the server. 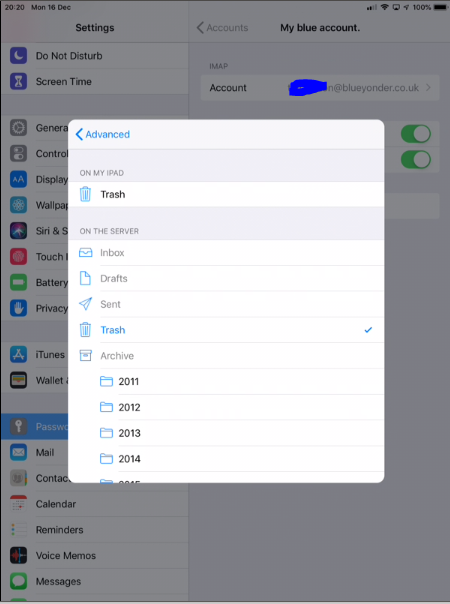 Make sure that the option to remove deleted messages is set to Never.  This means that on the iPad you will have to manually delete messages in the trash folder.

Warning:  Viirgin's Webmail service does periodically empty the trash automatically (about 7 days after a mail is placed there)  However if you monitor the trash folder, you should be able to see if any mail has been placed there that you don't expect.

I will also note that the ask before deleting only seems to take effect if you delete the mail when offline and then when the iOS device connects to the server, you get a message asking if you want to Undo the delete action.

It's certainly something worth looking at.

I can confirm that my Apple devices are all set to IMAP but that my PC is POP. It does look as though this issue will never be resolved satisfactorily as no one will accept responsibility, each blaming the other!  Fortunately as my PC is a POP account, I do have access to the missing emails that are absent  on the V.M webmail.

I have had another look at the dates of the missing emails & they do vary according to which device I look at.

I have deleted the account on the apple devices, then reinstalled with no improvement.

I will have a look at your suggestions & report back if I am successful.

Sorry to read that you've been having issues with your E-Mail service. Have you managed to get this resolved with the assistance with other posters or is it still on going?

Drop us a response and either I, or one of my colleagues will be happy to pick it up for you if you still require assistance